Samantha Kate James apologizes after telling Black people to 'relax' and that, in her opinion, white people 'have power over you'

The Independent reported that James wrote, “I don’t live in America and it has nothing to do with me, but to me, it seems like the ‘whites’ won,” she wrote in her first post. The beauty went on to say, “They have power over you.”

James continued saying, “To the Black people: Relax, take it as a challenge, makes you stronger.”

She says that “You chose to be born as a ‘coloured’ person in America for a reason. To learn a certain lesson.” 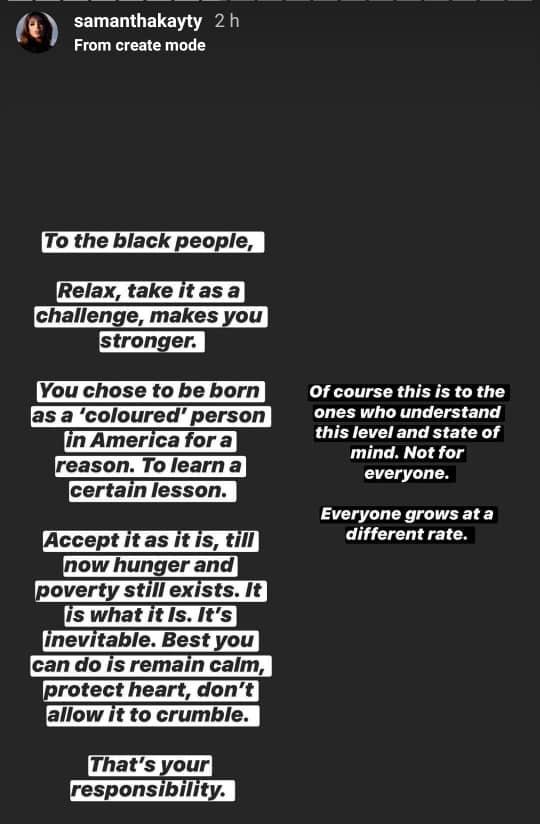 (Photo: Screengrab from The Indepedent)

When questioned by commenters, James explained that she meant that the soul “chose this life, this country, this race, this human form, specifically.”

She said, “Accept it as it is, till now hunger and poverty still exists. It is what it is. It’s inevitable. Best you can do is remain calm, protect heart, don’t allow it to crumble. That’s your responsibility.”

The former pageant queen’s statements were met with disapproval. One commenter said the posts were “actually embarrassing.” The comment went on to say, “I can’t imagine telling Black people to ‘relax’ and take the fact that they’re getting killed by the very people who swore to protect and serve them as a challenge.” The writer urged James to delete the posts and to consider something outside of her own privilege.

More than just her social media commenters disavowed the remarks. The Miss Universe Malaysia Organization also said the posts are “inappropriate.” They note that James is not affiliated with the organization and that her views are not in line with theirs.

“MUMO stands for a non-racial society and strongly condemns all acts of racism and prejudice anywhere in the world,” the organization said.

James has since deleted her posts and wrote a more detailed explanation on her page where she said she articulated herself “poorly.” She turned the comments off on the post.