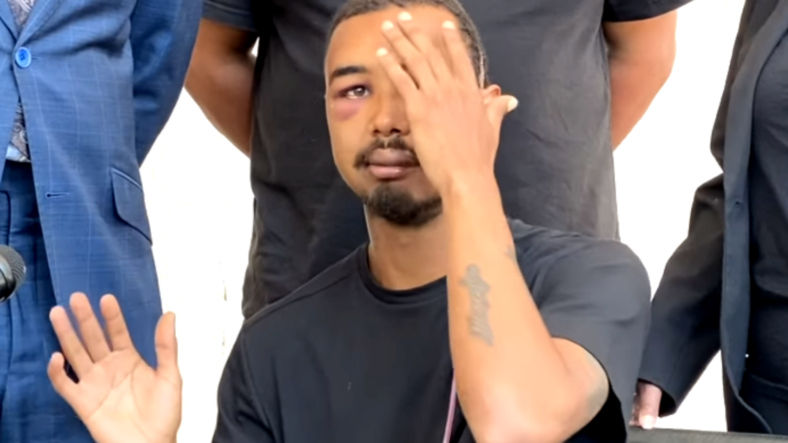 A 26-year-old Dallas man lost his eye, seven teeth, and had the left side of his fractured after being hit with an unknown object by police during a peaceful protest.

The incident happened on Saturday, May 30 as Brandon Saenz was looking for a friend during a protest when he says, he heard a “Boom!”

A tweet says that it is possible that Saenz was struck with a wooden round. The poster wrote that there is another video of officers singing, “America, F**k yeah!” That video has been deleted.

cw: blood, severe injury
DALLAS: @DallasPD shot a Black man man in the eye with a wooden round.

The man’s condition is unknown. In the next video you will hear the cops laughing and singing “America, Fuck Yeah!” seconds after shooting him. pic.twitter.com/Yirl8kzrFS

Daryl Washington, Saenz’s attorney, said that “Brandon was out peacefully protesting police brutality and now he’s a victim,” Washington said. “We can’t continue to have innocent individuals injured by police officers who have taken an oath to serve and protect.”

According to The Dallas Morning News, internal DPD policies state that less-lethal ammunition such as rubber or pepper balls should “never be used to intentionally target the head, neck, face, eyes, or spine unless deadly force is justified.”

“I just want my justice,” Saenz said Wednesday at a press conference.

The young man’s father, Andre Ray, told The Dallas Morning News that there is irony at his Black son being injured at a protest against police brutality. “They weren’t doing anything abnormal other than protesting,” he said. “Why do we handle young men this way? Why do we use aggression? Why do we use violence?”

Brandon Saenz’s attorneys said they have identified at least three other people with similar injuries.