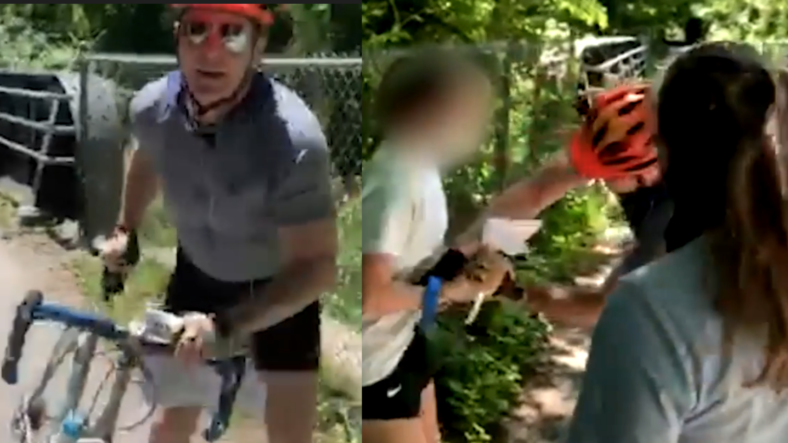 Maryland police are looking for a cyclist captured on video assaulting a teen girl as she posted flyers in support of the demonstrations over the death of George Floyd.

The Maryland-National Capital Park Police have now turned to the public for assistance identifying the aggressive white male who confronted the trio along the Capital Crescent Trail in Montgomery County on June 1.

In footage that has gone viral, the cyclist maniacally approaches the girl.

The person filming the confrontation is heard shouting, “Hey, leave her alone,” before he films the cyclist snatching the flyers from the girl. The flyers that infuriated the wanted man, according to ABC News, said “Killer Cops Will Not Go Free.”

As noted by The Hill, the flyers also read “A MAN WAS LYNCHED BY THE POLICE. WHAT ARE YOU DOING ABOUT IT? Text “Floyd” to 55156 Use your privilege for good.”

A different female voice is also heard off-camera shouting, “Do not touch her.” However, the man ignores those warnings. He rages toward the child who stands petrified as he forcefully takes the flyers from her as while the two others plead for him “to just walk away.”

This only triggers the man more. The unnamed man charges after the teen who is filming.

The teen told NBCWashington, “He sees me recording him and sees the fact that I recorded him as he was doing that, and he grabs his bike and he runs it into me and pins me to the ground.”

The teen claims the cyclist cursed them out and accused them of inciting riots as protests continue to rage on across the nation over the killing of Floyd.

“I’ve been putting up signs in my neighborhood and neighborhoods around mine to bring attention to the fact that a lot of these neighborhoods are in a position of huge privilege and can make a big difference in terms of both monetary donations and resources to fight against injustice,” the teen who took the video told NBC News.

Park Police tweeted Tuesday “We are seeking the public’s assistance in identifying the below individual in reference to an assault that took place this morning on the Capital Creacent (sic.) trail.”

We are seeking the public’s assistance in identifying the below individual in reference to an assault that took place this morning on the Capital Creacent trail. Please contact Det. Lopez at 301-929-2774 with any information. Pease reference case number 20001297. pic.twitter.com/EtC9Q0xBOp