Despite the coronavirus, people in Georgia headed out to vote only to be met with numerous obstacles

: A polling place worker holds an “I’m a Georgia Voter” sticker to hand to a voter on June 9, 2020 in Atlanta, Georgia. (Photo by Elijah Nouvelage/Getty Images)

Primary voting kicked off in Georgia on Tuesday, with reports of long lines and multiple voting machines not working. Many suspect the chaos is a preview of November’s presidential election.

Atlanta Mayor Keisha Lance Bottoms took to Twitter to report that “voters in line at Ralph Bunche precinct, one of the largest in Atlanta, say NONE of the machines are working.” 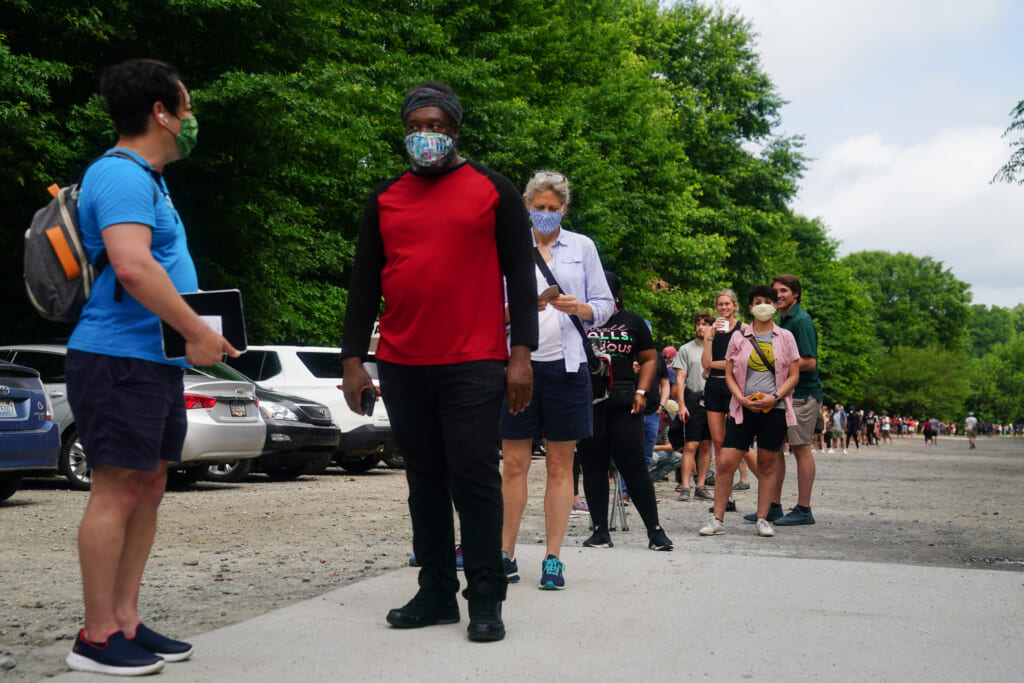 People wait in line to vote in Georgia’s Primary Election on June 9, 2020 in Atlanta, Georgia. (Photo by Elijah Nouvelage/Getty Images)

In a follow-up post she added, “This seems to be happening throughout Atlanta and perhaps throughout the county. People have been in line since before 7:00 a.m. this morning.”

Hours later, the secretary of state vowed to investigate the voting delays.

If you are in line, PLEASE do not allow your vote to be suppressed. PLEASE stay in line. They should offer you a provisional ballot if the machines are not working. https://t.co/1lVu3rEsCg

Election officials in the Atlanta area are reportedly “processing ballots painfully slowly” because the new touch screen machines have been an #epicfail so far, according to The Washington Post. Georgia’s Secretary of State office says the voting delays are due to outdated systems that are not compatible with the new devices.

VOTER SUPPRESSION out in the open in Georgia. This is what @staceyabrams was talking about. We MUST FIX THIS before November. #VoterSuppression https://t.co/wIYG0CI8tx

The ballot-marking machines were rolled out statewide on Tuesday to replace the paperless electronic voting system that was deemed unreliable by a federal judge.

As locals took to social media this morning to complain about the hot mess unfolding at voting polls, Mayor Bottoms urged voters that “If you are in line, PLEASE do notallow your vote to be suppressed. PLEASE stay in line. They should offer you a provisional ballot if the machines are not working.”

Meanwhile, local officials are being blamed for the problems with the new voting machines.

“At the Sandy Springs Library there are 15 voting machines and they are still only allowing in 4 voters at a time. Fulton continues their history of problems in executing elections,” tweeted Gabriel Sterling, the elections official charged with implementing Georgia’s new voting system, according to Fox News.

“The biggest issue in Fulton we’ve seen so far is that workers are trying to activate voting cards upside down. Fulton should be sending the word out on that,” he added.

One voter in Atlanta said he was sixth in line at a polling location but spent more than three hours waiting because staffers were clueless on how to use the machines.

“Here trying to vote in Central Park in Atlanta. They said all machines are broken and not working and that they reported it before today but no one responded. Hundreds in this line and in 50 minutes only 4 people have voted. They are doing by hand,” Ron Clark tweeted. He ultimately wasn’t able to cast his ballot.

READ MORE: Keisha Lance Bottoms could be in consideration for VP pick

“Whether you’re a Democrat or a Republican, or whatever party you’re affiliated with, you should have an opportunity to express your voice,” Clark said. “Right know I just feel like a lot of people are doubting the strength and the effectiveness of democracy in our country.”