In bold and bright colors, the LGBTQ+ community makes a statement of inclusivity and social justice by using art as a megaphone 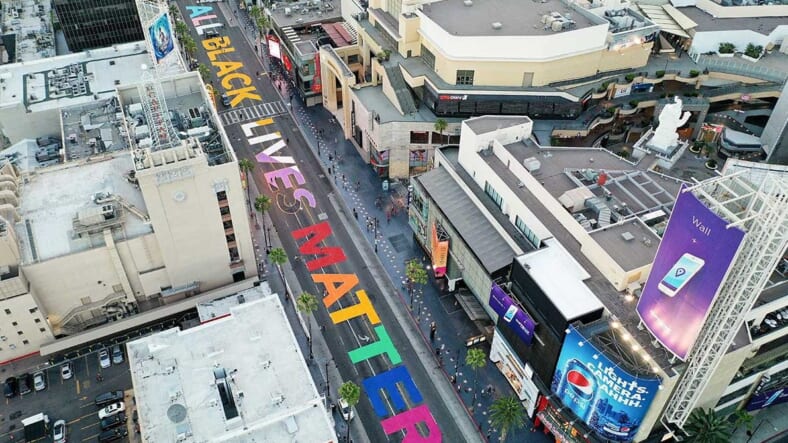 For this year’s Pride celebrations, which will be its 50th anniversary nationwide, the LGBTQ+ community took to the streets of Hollywood to honor those who are fighting for racial justice.

Organizers painted All Black Lives Matter in block letters between Hollywood Boulevard and Highland Avenue on Saturday. They also created a mural to celebrate all victims of discrimination —regardless of race, gender identity, or sexuality.

The gesture is meant to show “inclusivity and solidarity” during a time when the country is divided on how to deal with police brutality and its impact on the Black community, Los Angeles CBS affiliate reported.

Painted in classic ROY G. BIV, the letters in the slogan symbolizes the unifying Rainbow symbol of the LGBTQ+ community. Appropriately, this year’s march will start at the base of this justice marker in Los Angeles on Sunday at 11:00 a.m.

“The protest is in direct response to racial injustice, systemic racism, and all forms of oppression,” ABLM said on its website. “The LGBTQ+ community must extend its support to unite against oppression, police brutality, racism, transphobia, and the many other disparities disproportionately impacting the Black community.”

On the All Black Lives Matter street, there is a mural of Black and gay people alike who have passed away due to police violence. This beautiful demonstration of unity gives nods to other cities that have used paint brushes and tar surfaces as megaphones.

Washington D.C. was the first to use art as protest in this way. In the Chocolate City, Black Lives Matter is painted boldly on 16th street, just two blocks away to the White House. Mayor Muriel Bowser, a Black woman, contracted painters in response to the week-long protests that stemmed from George Floyd‘s death.

Set up by an advisory board consisting of Black LGBTQ+ leaders and organizations, the ABLM declared on its website that the protest is “in direct response to racial injustice, systemic racism, and all forms of oppression.”

COVID-19 and/or bigoted officers have invoked fear in some demonstrators and now have expressed concern about marching.  However, others like 50-year-old Antoinette Jordan told the Los Angeles Times, “[the demonstrations] help give people a voice.”

Jordan, who marched alongside her boyfriend, her adult LBGTQ sons are experiencing personal difficulties.