The popular YouTuber teamed with The Georgia Association of Minority Entrepreneurs to present a $10,000 check to Wilbourn Sisters Designs. 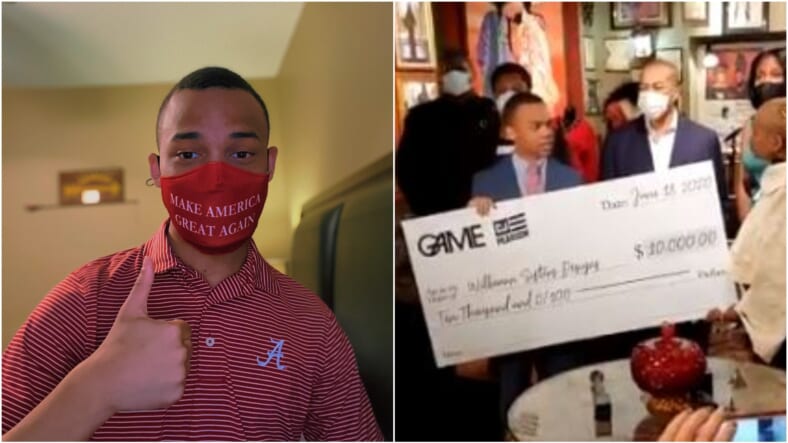 A beloved Black-owned business in downtown Atlanta that was damaged during violent protests has received a huge donation thanks to teen conservative CJ Pearson.

The popular YouTuber teamed with The Georgia Association of Minority Entrepreneurs on Thursday to present the owner of Wilbourn Sisters Designs with a $10,000 check, WSB-TV 2 Atlanta reports.

The funds will help cover the significant damages done by rioters weeks ago during protests over the killing of George Floyd, while in the custody of Minneapolis police.

Pearson, 17, president of Last Hope USA, which promotes civics education, said he was inspired by his parents to pay it forward and give back to the community.

On our radio show @thecjpearson gave away $10,000 to Wilbourn Sisters Designs, a staple black-owned business in #atlanta damaged during #GerogeFlolyd protest. Today he showed up with the check. ?@shelleywynter1 @wsbradio @scottbakerjr @DJCrystal20 pic.twitter.com/DCcI6QkJZe

“I think it’s so important that we put actions behind our words,” he said. “Let’s show that black lives matter by supporting these black-owned businesses that were adversely affected by these recent events, and not intentionally.”

While several businesses were vandalized during the riots, Wilbourn Sisters Designs on Peachtree Street was reportedly hit the hardest. Owner Janice Wilbourn said the donation will allow her to do more than sell clothes.

“We’ll be teaching here,” she said. “It will be more of a learning center.”

Pearson decided to take action and help the most vulnerable because “it’s so important to put actions behind our words,” he said. Citing the recent #BlackoutTuesday event on social media, Pearson added, “Posting a black screen isn’t enough. We need to go do something.”

I’m in the city of Atlanta today. Many storefronts boarded up. pic.twitter.com/lTduADrwCH

In related news, Pearson, who will turn 18 on July 31, recently criticized Democrats for pushing to defend police departments, rather than present solutions to the rising racial tensions in the country.

“You have Antifa going into black communities and burning those communities to the ground. That is an issue. They are using his death to do that,” he said during the Centennial Institute’s webinar on Thursday.

Pearson called the idea of defunding police “not even a serious argument.”