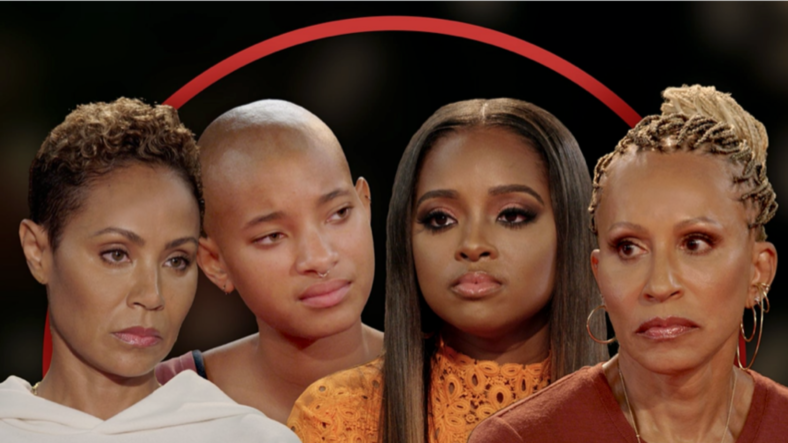 Jada Pinkett Smith, Willow Smith, and Adrienne Banfield Norris, affectionately referred to as Gammy, are joined by powerful voices to discuss the current social justice and race issues in America.

“It’s Juneteenth, also known as Freedom Day. On June 19th, 1865, the last remaining African American slaves were set free. On this June 19th, Black America is in a crisis. Two women who I love and respect are here for real talk about the urgent time we are living in right now,” remarks Mrs. Smith, introducing the special guests.

Mallory spoke with the ladies at their signature red round table and got right to the point. The activist hit on important subjects at all angles. She broke down the term “Karen” not as a popular name, but an identifier made popular on social media, signifying white women who use their privilege to endanger and demean Black people and other minorities.

“It’s a mindset. Black Twitter is a place where you can find love or you can find something else. You don’t want to get caught in Black Twitter on the wrong side,” explains Mallory in the episode. “For Black people, because of everything that we’ve experienced, coming up with names and ways to describe the pain and the insult and the injury is all we have. You at least to be able to call it out and Karen is a part of that.”

The pair also bring up and discuss cancel culture, as a whole, and debate whether or not canceling public figures when they have major or minor mishaps is progressive or pointless. Willow takes the stance that when people are taken down for their actions, they miss the opportunity to learn.

“But I feel like if we really want change, shaming doesn’t lead to learning,” remarks the teenager.

She is met with agreement from Mallory, who says cancel culture offers little room for growth and understanding.

“It is a space that is a little difficult to maneuver because you do have to leave people room to make mistakes, to grow and to learn, but they have to show that they’re willing,” the activist says.

? #Repost @redtabletalk ・・・ On tomorrow's new episode, Tamika Mallory joins the table to discuss the meaning behind the term "Karen," the associated attitude, and what that means in the workplace.

Davis virtually took her seat at the red table to discuss how white people should involve themselves with social justice movements and how some are not wholeheartedly on the quest for equality, but simply aiming to be on the right side of history.

“I think it’s good that we’re seeing so many white people out in the streets,” Davis remarks with verbal agreement from the other women. She continues to explain how some white people, such as NFL Commissioner Roger Goodell, might take a knee in solidarity in good faith, however the action does not represent their full beliefs.

The full episode is available for viewing on Facebook Watch at www.facebook.com/redtabletalk.