Jamie Foxx bulks up, confirms Mike Tyson biopic is in the works 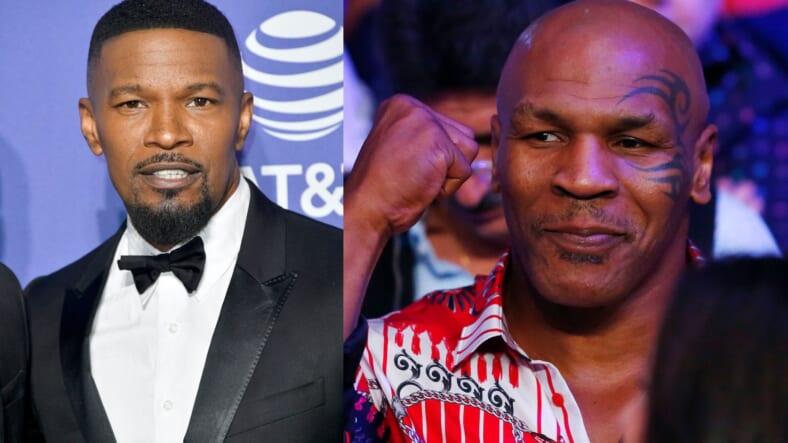 The multi-talented Jamie Foxx has been talking about portraying former boxer Mike Tyson in a biopic for years.

After all this time, the project is truly coming to fruition, according to CNN.

Foxx, who won an Academy Award for best actor in his 2004 portrayal of Ray Charles, confirmed the upcoming film in an Instagram Live chat with Hollywood producer Mark Birnbaum. When asked if the project is in the works, Foxx responded: “It’s a definitive yes.”

“Doing biographies is a tough thing. Sometimes it takes 20 years to get it done, but we officially got the real ball rolling,” said Foxx, whose career spans more than three decades. “I can’t wait to show people what it is.”

The greatest talent of our generation for the hour Jamie Foxx

Foxx has also disclosed that he has been bulking up his physique in preparation to play Tyson, the youngest heavyweight boxing champion in history.

“The transformation begins… ‘FINDING MIKE,'” Foxx said in an Instagram post showing off his early prep progress. “A few months ago we started the journey… The first but biggest task is to transform the body… with a regiment (sic) of pull-ups dips and push-ups we are off to a pretty good start… we have a ways to go but God willing.”

The transformation begins… “FINDING MIKE”. It is no secret that I have been pursuing the @miketyson biopic for some time… people always ask me when is it going to happen?… things have finally lined up… A few months ago we started the journey… The first but biggest task is to transform the body… with a regiment of pull-ups dips and push-ups we are off to a pretty good start… we have a ways to go but God willing… yesterday on my good friends @markbirnbaum show. I shared these early pics of the process… like I said we have a ways to go… But I am prepared to get there! #swipeleft TYSON!

Tyson won the title in 1986 at the age of 20 when he knocked out 33-year-old Trevor Berbick within 6 minutes.

“I’m the youngest heavyweight boxing champion in history,” Tyson reportedly told his manager after the bout, “and I’m going to be the oldest.”

The latter, however, never came to fruition for the retired boxer who is now 53 years old. George Forman reigns as the oldest to ever hold the heavyweight belt at the age of 45 after defeating Michael Moorer, who is nearly two decades his junior, in 1994.

Foxx revealed a photo of his new body during the interview with Birnbaum, stating he’s been engaging in intense training. He’s looking to increase his weight from 216 pounds at the starting of shoot to 230 pounds.

READ MORE: Tyrese blasted by Jamie Foxx and others for ‘reverse racism’ posts

“The technology of how I’m going to look, I guarantee you people will run up on me in the street and ask for autographs, and think that I’m Mike,” Foxx said.

Foxx, 52, spoke publicly about playing Tyson as far back as 2015. In a Hot 97 FM interview on Ebro in the Morning, Foxx gave a detailed description of the planned opening scene of the biopic.

The Oscar-winner has been impersonating Tyson in his stand-up comedy since his early 20s, even once with the boxer in the audience. He spoke about portraying Tyson through his tumultuous life, which included a 1992 rape conviction and going bankrupt in 2003.

“I saw him at the height of his career, and then when things got bad and bumpy I also saw him as well. So what I’m excited about the movie is to show those moments,” Foxx stated. “I think everyone, young and old, will be able to understand this man’s journey.”