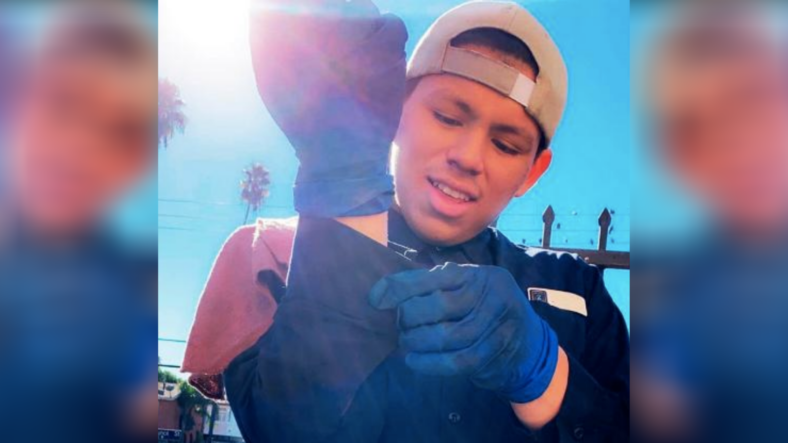 Family members of Andres Guardado gathered in Gardena, California on Sunday to call for justice in the police killing of the 18-year-old man. The family was joined by residents who walked over three-and-a-half miles to Compton where they were met with force by police officers.

According to reports, police told the crowd to get back. However, as they drew back from the steps of the sheriffs’ office, police fired upon them. Multiple people were also arrested.

According to a report from KSBY, the shooting was possibly captured by neighboring security cameras.

Wegener says that investigators have taken six or seven exterior cameras from the scene. Activists and social media users are asking for that footage to be released. One Twitter user questioned what is being done to ensure that the footage is not corrupted or deleted, and demanded that an outside party have the opportunity to review it.

When does an organization outside of the @LASDHQ get to review the security camera footage of the LASD deputies’ interactions with Andres Guardado? What’s being done to ensure the footage isn’t corrupted or deleted? @LACoSheriff @CountyofLA @LACountyCOC https://t.co/CJWpWQ5Q0P https://t.co/GFOpbv5omt

Guardado was shot and killed on Thursday, June 18 by a Los Angeles County Sheriff Deputy. According to a CNN report, the man was approached by deputies while standing outside of a business. LA County Sheriff Homicide captain, Kent Wegener, said in a news conference that Guardado “reportedly looked toward the deputies” and “produced a handgun.”

Wegener said that Guardado then ran from deputies toward the rear of the business. It was there that one deputy fired six shots. The man was struck in the upper torso and pronounced dead at the scene.

Officers were not wearing body cameras.

Congresswomen Nanette Diaz Barragan and Maxine Waters issued a joint statement regarding the incident, “Andres Guardado is the latest young man of color killed by police gunfire. He was shot in the back. The officers involved did not wear body cameras,” the statement reads. “We demand answers and call for an independent investigation into this tragic death. There must be full transparency so the public can trust the investigation and we know we are getting the truth.”

Protesters have insisted that Guardado was working as a security guard at the business where he was killed. However, police investigators found that he did not have a license through the California Department of Consumer Affairs Bureau of Security and Investigative Services. Further, at only 18-years-old, he was under the legal age to be an armed security guard in the state of California.

An autopsy of Guardado’s body is being conducted by LA County. On Sunday, his cousin Celina Abarca told CNN that he was just “a baby,” she said that the death doesn’t feel real to her, “I close my eyes and I hope and I pray that it’s not really happening.”