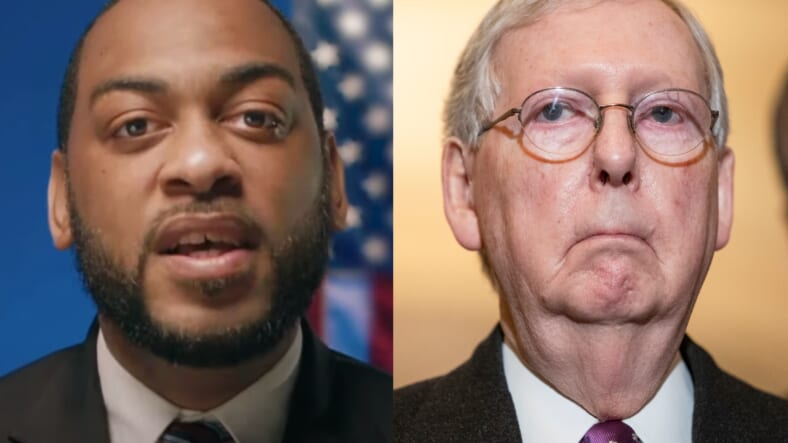 Kentucky Senator Mitch McConnell has long been regarded as an enemy of Black people, beginning, conservatively, in the late 1980s, when he voted against the Civil Rights Restoration Act of 1987, and continuing to this day with his unwavering support of the Trump White House.

But a young, Black, educated and homegrown Kentuckian who succeeded in securing a seat in the Kentucky House of Representatives in 2018, Charles Booker, aims to defeat the veteran Republican senator.

theGrio spoke exclusively with Booker ahead of the June 23 primary, which is today, about what inspired him to enter politics, how the police killing of Breonna Taylor impacted him, and why Kentuckians should vote for him.

Like far too many Black families, Charles Booker grew up surrounded by poverty. “My childhood really shaped my view of the world, which is one of the things that really led me to go into politics,” Booker shared with theGrio. “Seeing how hard [my mother] worked just let me know that we weren’t struggling because we were lazy, because we were morally deficient.”

“It just really lit a fire under me to go into the spaces where the policy and budgetary decisions are made,” Booker shared. “It makes sure that regular people are accounted for.  My wife and I have two daughters, and I’m trying to make sure we don’t pass poverty down to them.”

Booker hopes to beat a pro-Trump Democrat in the primary and Senator McConnell in November. “My focus is about uprooting racism,” he said.

“We find ourselves being ignored over and over again like no one ever listened to us, no one ever cared how we feel, no one ever pays attention to our struggles, challenges or aspirations,” Booker added. “We are invisible and that is being displayed once again because these big donors are telling us all we deserve is a pro-Trump Democrat.”

Here I am. Right beside you. Together, we are bending the arc.

Booker then took aim at McConnell.

“[Senator McConnell] is essentially playing politics while we die and he’s profiting off poverty,” Booker explained. “[Defeating him] is just as important as getting rid of Donald Trump.”

Booker has received high-profile endorsements from Senators Bernie Sanders and Elizabeth Warren, something he is proud to have achieved.

“It has really been humbling but the most important thing for me is that it’s just an acknowledgment that Kentuckians are shining our light, we are fighting back, and we are leading the path forward in this time of pain and frustration,” Booker said.

Booker also shared what made the murder of Breonna Taylor in Louisville so personal.

“My cousin TJ (Tyrone Booker, Jr) was really good friends with Breonna. TJ was murdered on Easter Sunday four years ago and Breonna was a support to him, to my family and it’s been really, really hard to just grapple with the fact that she’s gone,” Booker expressed.

“A lot of folks were mourning in the streets because we felt so invisible. We feel like justice doesn’t account for us, and the laws help to affirm this.”

While protesting the death of Taylor, Booker recounts being met with opposition from law enforcement. “We were met with this adversarial posture from our law enforcement, and I said, you’re gassing me, even as a state representative responsible for the area where a lot of the protests have happened.”

But some good came out of the protests, he said. “It has been difficult and frustrating, but I will tell you the response from the community is really inspiring,” Booker said. “You’re seeing people band together from all walks of life, all corners of the commonwealth.”

Finally, Booker explained why those who want to address structural racism and inequity should vote for him.

“I want things to change for Kentucky,” Booker shared. “I’ve walked with teachers to help protect pensions, I’ve stood with minorities to make it easier for them to get other benefits and treatments, I have stood with students demanding action on climate change.

“I have stood with family members that have lost loved ones to gun violence, demanding that these senseless acts be declared as a public health crisis. I have done that work in helping small farmers compete in the commercial market,” he added.

“I’m committed to Kentucky and the people of Kentucky are standing with me because I’ve stood with them.”