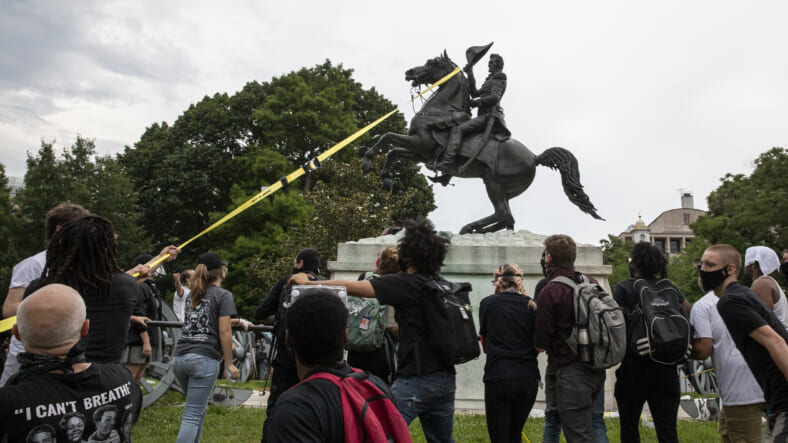 Protestors attempt to pull down the statue of Andrew Jackson in Lafayette Square near the White House on June 22, 2020 in Washington, DC. (Photo by Tasos Katopodis/Getty Images)

The protesters in Washington D.C. have organized to take down the statue of the seventh president of the United States of America, Andrew Jackson, in Lafayette Park.

In the process, they have formed their own governance called the Black House Autonomous Zone aka “BHAZ.”

The Jackson statue is one of many monuments that represent distasteful periods of the country’s history, symbolically continuing the very foundation of Black oppression: racism and slavery.

As a national hero, Jackson is problematic. He was a slave owner and a slave inter-continental trader. On his Hermitage estate in Nashville, that lavish spread across 420 acres of land, he had more than 150 slaves living there.

He also abused Native Americans with the passing of the Indian Removal Act, which directly affected the Choctaw, Seminole, Creek, Chickasaw, and Cherokee nations. He moved them from their respective homelands and forced them to live in Oklahoma. He did not provide transportation but had them travel that 1,000-mile trek by foot, minimal food and even less clothing articles and blankets,

This act is directly responsible for almost 50,000 native people dying.

For those occupiers in the BHAZ, the statue represents the highly celebratory culture that American has for heroes that have practiced discrimination as a lifestyle.

According to Fox News, the U.S. Park and D.C. police officers have been given the okay to use chemical irritants to break up the crowds gathering since George Floyd’s death.

The outlet also states that the U.S. Secret Service wants reporters to leave the White House/BHAZ. But the videos have already been leaked and protesters are using their cell phones and recording what they see, essentially becoming CNN for the streets.

Videos show them trying to topple the statue, images from around and within the BHAZ, and the church that the president used for a photo-op.

Just arriving at the scene – cops have shut down our to McPherson Square. This is one entrance to the BHAZ pic.twitter.com/ZZ6CAQI42D

Donald Trump is against tearing down these statues or monuments, stating he will do an executive order to support existing laws to protect the maintenance of these landmarks.