Trump vows prison time for those who vandalize and destroy statues

A vandalized Civil War statue looks over the fourth consecutive day of protests in the aftermath of the death of George Floyd on May 31, 2020. (Photo by Michael Ciaglo/Getty Images)

President Donald Trump is threatening those who vandalize statues with jail time in response to Confederate landmarks being desecrated in recent weeks.

In the wake of George Floyd’s death while in the custody of Minneapolis police, there have been protests and the destruction of monuments to monuments that honor Confederate soldiers and slave owners. On Monday, there was an attempt to topple the statue of President Andrew Jackson which is located near the White House. The attempt was unsuccessful but drew the rebuke of Trump. 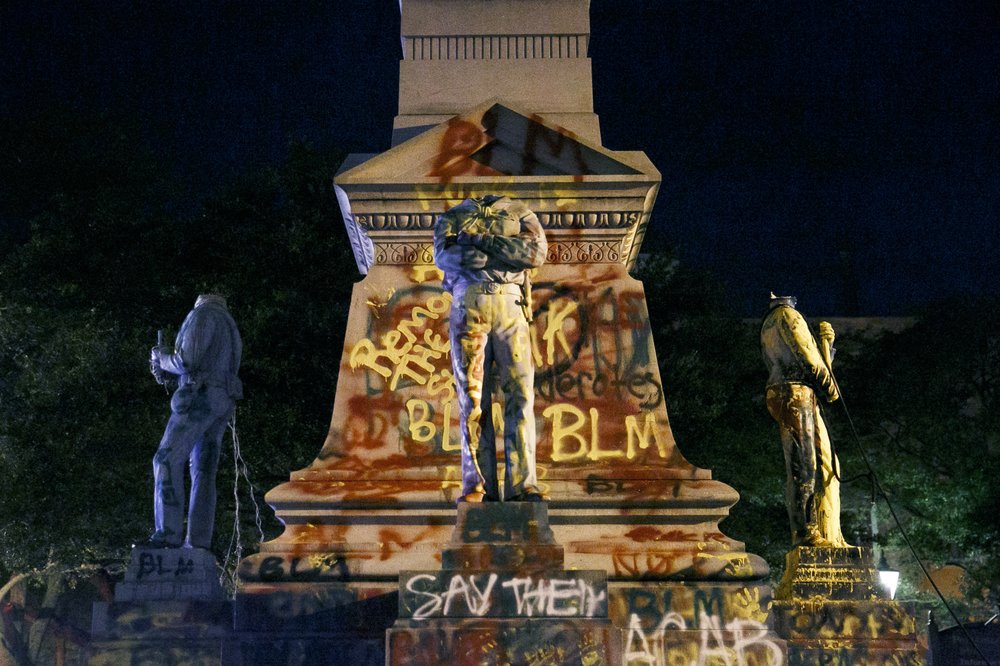 In a series of tweets sent on Tuesday, Trump threatened those who destroy the monuments with stiff jail sentences. He cited the 2003 Veterans’ Memorial Preservation Act and vowed that anyone who damaged “any monument, statue or other such federal property” would be arrested and face the possibility of up to 10 years in prison.

…..This action is taken effective immediately, but may also be used retroactively for destruction or vandalism already caused. There will be no exceptions!

As NPR reports, the legislation was directed at anyone who willfully destroyed or made any attempt to ruin “any structure, plaque, statue, or other monument on public property commemorating the service of any person or persons in the armed forces of the United States shall be fined under this title, imprisoned not more than 10 years, or both.” 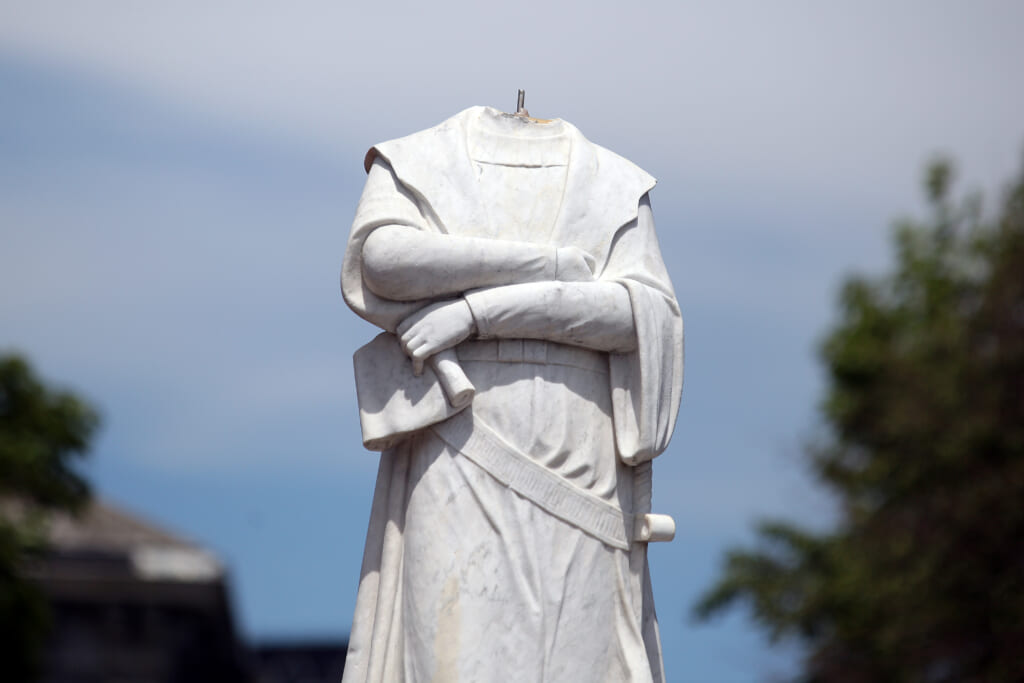 A statue depicting Christopher Columbus is seen with its head removed at Christopher Columbus Waterfront Park on June 10, 2020 in Boston, Massachusetts. The statue was beheaded overnight and is scheduled to be removed by the City of Boston. (Photo by Tim Bradbury/Getty Images)

Despite the president’s threats to “beware”, the act does not require him to authorize it. It had been passed with bipartisan support after the graves of veterans had been disturbed with vandalism.

Trump told reporters later in the day that he planned to sign an executive order that would reinforce the existing law but did not specify what he meant.

“We are looking at long-term jail sentences for these vandals and these hoodlums and these anarchists and agitators and call it whatever you want,” Trump said. “Some people don’t like that language, but that’s what they are. They’re bad people. They don’t love our country. And they’re not taking down our monuments, I just want to make that clear.”

Attorney General William Barr and Republican Sen. Tom Cotton of Arkansas have also called for punishment for those who destroy the monuments. However, not everyone is in agreement over what course of action the Trump administration should take.

“How an order like that would actually be enforced remains to be seen,” Chad Williams, chair of the Department of African and African American Studies at Brandeis University, said.

“But what this thing speaks to in a really problematic way is the president’s desire to tamp down, to crush any forms of protest and dissent and to weaponize the various apparatuses of federal government, including the military, National Guard, Secret Service, to act as agents of enforcement.”