In comparison, that percentage was 17% for Hispanics and 9% for those who are white, according to The Washington Post-Ipsos poll.

A new nationwide survey has revealed that almost 1 in 3 Black people know someone who has died from COVID-19, far exceeding that of their white counterparts.

The Washington Post-Ipsos poll found that 31% of Black people know someone who died because of the deadly virus. In comparison, that percentage was 17% for Hispanics and 9% for those who are white.

Slightly more than half of the Black people surveyed know someone who has been sick or shown symptoms – drastically less so for Hispanics and whites with only 4 in 10 experiencing the same. This contrast is occurring as there has been a surge in new infections and deaths. The current positive case count is more than 2 million in the U.S., according to John Hopkins.

The disparity underscores how the coronavirus pandemic has disproportionately impacted the African American community. According to APM Research Lab, the mortality rate for Black people is about 2.3 times higher than those of whites and Hispanics.

“A lot of people have lost folks, and who knows who will be next?” said Lois R. Travillion.

Travillion, 82, is a retired Chicago math teacher and administrator. She lost two friends because of the virus. She argued lives are more important than restoring the economy. 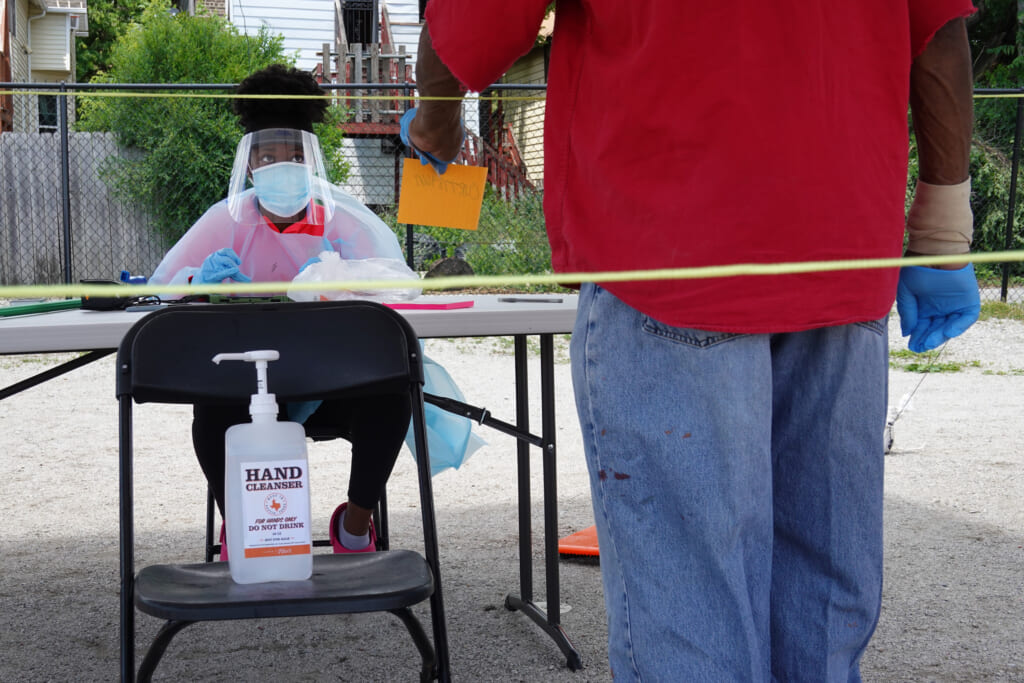 Workers check in residents at a mobile COVID-19 testing site set up on a vacant lot in the Austin neighborhood on June 23, 2020 in Chicago, Illinois. The site is one of four mobile testing sites, two community-based sites and two first-responder-focused sites being implemented by the city. (Photo by Scott Olson/Getty Images)

“There are so many people who have died. You won’t even need the economy because there won’t be anybody around,” she said.

Experts claimed that the pandemic has exposed the socioeconomic inequalities Black people have always encountered when it comes to their health and treatment.

“This pandemic has really unearthed — shone a real bright light on — the ways these disparities should not be accepted and are not tolerable,” said Joseph Betancourt, vice president and chief equity and inclusion officer at Massachusetts General Hospital in Boston.

Attitudes about the virus were also a contributing factor as 83% of Black people surveyed stated it was more important to control COVID-19. Only half of white Americans expressed a similar view in a recent Washington Post-ABC News poll.

Politics weighs heavily on the minds of African Americans as 8 in 10 declared that voting for a president who prioritizes the coronavirus is very important to them. Hispanics are similar in their mindset but only 6 in 10 white Americans held the same view.

Georges C. Benjamin, executive director of the American Public Health Association said the survey “tells us a lot about how the life experiences of individuals in the United States are different by race.”

He added, “Life experiences drive a lot about how you view the world, how you make decisions and what you do.”