Ricardo Alonso-Zaldivar and Mark Sherman, Associated Press   |
U.S. President Donald Trump the week the House of Representatives passed the latest economic stimulus package that was passed earlier in the week by the U.S. Senate giving roughly 484 billion to restart a small business loan program and give more money for health care providers and virus testing. (Photo by Drew Angerer/Getty Images)

WASHINGTON (AP) — As coronavirus cases rise in more than half of the states, the Trump administration is urging the Supreme Court to overturn the Affordable Care Act.

The administration’s high court filing at 10:30 p.m. Thursday came the same day the government reported that close to half a million people who lost their health insurance amid the economic shutdown to slow the spread of COVID-19 have gotten coverage through HealthCare.gov.

The administration’s legal brief makes no mention of the virus.

More than 20 million Americans could lose their health coverage and protections for people with preexisting health conditions also would be put at risk if the court agrees with the administration. Nothing will happen immediately. The case won’t be heard before the fall.

House Speaker Nancy Pelosi blasted the administration’s latest move in a partisan battle over “Obamacare” that has stretched on for a full decade since the law’s passage in 2010. Pelosi is planning a floor vote early next week on her own bill to expand the ACA, sweetening its health insurance subsidies so more people will be covered.

RELATED: Trump decides not to reopen Obamacare enrollment amid coronavirus

“There is no legal justification and no moral excuse for the Trump administration’s disastrous efforts to take away Americans’ health care,” she said in a statement.

Just as the nation seemed to be getting better control over the virus outbreak, states including Arizona, California, Florida, Georgia, Nevada and Texas are reporting a surge in cases. Overall, more than half the states are seeing case increases and some are tapping the brakes on reopening plans.

Anger over problems with “Obamacare” was once a winning issue for Republicans, helping them gain control of the House in 2010 and the Senate in 2014. But the politics of the issue flipped after President Donald Trump failed to deliver in 2017 on his vow to “repeal and replace” the health law and provide lower-cost coverage for everybody. Democrats were energized by their successful defense of the ACA, and that contributed to their winning back the House. 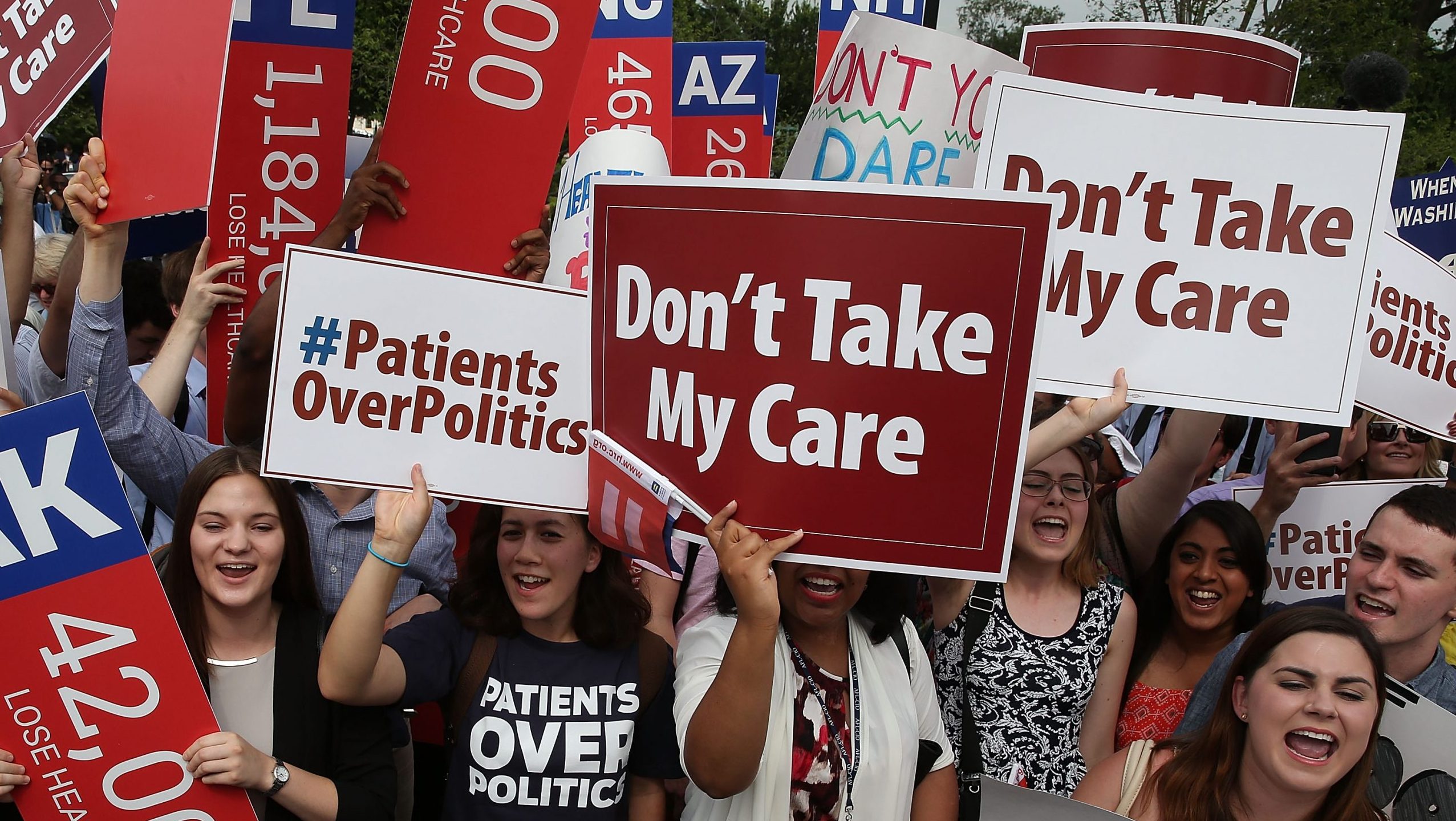 People celebrate in front of the US Supreme Court after ruling was announced on the Affordable Care Act. June 25, 2015 in Washington, DC. (Photo by Mark Wilson/Getty Images)

In the case before the Supreme Court, Texas and other conservative-led states argue that the ACA was essentially rendered unconstitutional after Congress passed tax legislation in 2017 that eliminated the law’s unpopular fines for not having health insurance, but left in place its requirement that virtually all Americans have coverage.

Trump has put the weight of his administration behind the legal challenge.

If the health insurance requirement is invalidated, “then it necessarily follows that the rest of the ACA must also fall,” Solicitor General Noel Francisco wrote Thursday. It’s the third time the court is being asked to undo “Obamacare.” Two previous attempts failed.

At the White House on Friday, there was no turning back.

“A global pandemic does not change what Americans know — Obamacare has been an unlawful failure,” White House spokesman Judd Deere said Friday in a statement. He said it limits choice and “forces Americans to purchase unaffordable plans.”

Other prominent Republicans, including Sen. Lamar Alexander of Tennessee, have said Congress didn’t intend to bring down the whole law by striking the coverage penalty.

Alexander, who leads the Health, Education, Labor and Pensions committee, has repeatedly said there’s no way Congress would repeal protections for people with preexisting conditions. He says senators intended to repeal the penalty for people who go without coverage, and that’s all.

The Trump administration’s views on what parts of the ACA might be kept or replaced if the law is overturned have shifted over time. But in legal arguments, it has always supported getting rid of “Obamacare” provisions that prohibit insurance companies from discriminating against people on account of their medical history.

Nonetheless, Trump has repeatedly assured Americans that people with preexisting conditions would still be protected. Neither the White House nor congressional Republicans have specified how.

The government report showing rising sign-ups for health coverage under the ACA amid the coronavirus shutdown came from the Centers for Medicare and Medicaid Services. The figures are partial because they don’t include sign-ups from states that run their own health insurance marketplaces. Major states like California and New York are not counted in the federal statistics.

An estimated 27 million people may have lost job-based coverage due to layoffs. That means they would be eligible for a special sign-up period for subsidized plans under the Obama-era law. Many may also qualify for Medicaid.

Thursday’s report from the government showed that about 487,000 people signed up with HealthCare.gov after losing their workplace insurance this year. That’s an increase of 46% from the same time period last year.

It’s unclear from the government numbers how many of the new enrollees lost their coverage because of layoffs due to the pandemic. CMS also made no estimate of how many people will ultimately seek coverage through the Obama health law as a result of economic shock waves. Generally there’s a 60-day window to apply after losing coverage.

However, the report found a clear connection. “While the magnitude may be unclear, job losses due to COVID-19 have led to increased enrollments on HealthCare.gov,” it said.