While Joni Kueng says her son had the right intentions in becoming a police officer, her daughter says he knows 'right from wrong'

The mother of J. Alexander Kueng wants the public to know that her son, who was charged for his role in the death of George Floyd while in police custody, joined the police force to address the tension between police and Black communities.

Joni Kueng, who raised J. Alexander as a single mother, told The New York Times that J. Alexander, 26, was inspired to diversify the Minneapolis police ranks to root out racial disparities and brutality in policing that he has witnessed in his lifetime.

He sought to change the flawed system from the inside.

“He said, ‘Don’t you think that that needs to be done from the inside?'” Joni Kueng said detailing her son’s motive to become an officer in the wake of past high-profile incidents of police violence against Black people.

“That’s part of the reason why he wanted to become a police officer — and a
Black police officer on top of it — is to bridge that gap in the community, change the narrative between the officers and the black community.”

J. Alexander Kueng, who is half-white and half-Nigerian, was a rookie on his third shift when that fateful interaction between Floyd and four officers took place about a month ago.

Joni Kueng, who is White, also adopted four Black children. Her adoptive daughter, Radiance Kueng, 21, told The Times that her mother never discussed race with her kids and that it was a detriment to their lives. 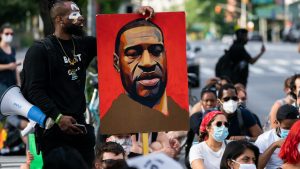 “Race was not really a topic in our household, unfortunately,” she said. “For her adopting as many Black kids as she did — I didn’t get that conversation from her. I feel like that should have been a conversation that was had.”

Two of J. Alexander Kueng’s siblings, Radiance Kueng and Taylor Kueng, 21, both called for the arrests of all the officers involved in Floyd’s killing. The two also went out to protest in Minneapolis.

Radiance Kueng said that her brother should have intervened as Floyd screamed multiple times that he could not breathe, The Times reports. She is also considering changing her last name.

“I don’t care if it was his third day at work or not,” she said in a Facebook post. “He knows right from wrong.”

J. Alexander Kueng is currently charged with aiding and abetting in murder for his part in Floyd’s death. He and another officer held a handcuffed Floyd to the ground a third officer, Derek Chauvin, put his knee on Floyd’s neck for 8 minutes and 46 seconds until his death.

All four cops involved have been fired and charged. Chauvin faces the most serious charges, including for second-degree murder and manslaughter.

Kueng was released on $750,000 bail last week and his relationships have suffered.