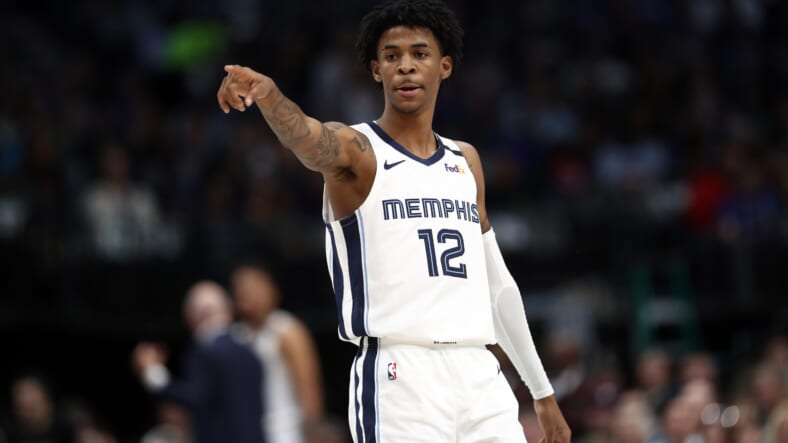 Memphis point guard Ja Morant is a rookie that before the NBA season was abruptly halted in March was considered among the league’s brightest new stars. But after anti-police protests in the wake of the deaths of George Floyd and Breonna Taylor who were both killed by police, Morant may have made a rookie error in judgment.

As reported by ESPN, The Memphis Grizzlies star tweeted – the deleted – and anti-police post that replaced his name on the back of his jersey with ‘F***k 12.’ Twelve is Maront’s jersey number but the phrases is widely used to denote disgust with police officers.

“Want dat on my jersey fr’ he accompanied the tweet.

After deleting it, Morant went back on Twitter to clarify his position.

“I know there are good cops “12” out there. I know some, and a few are family. I am thankful to the cops at Murray State who took care of me and the cops who continue to watch over me with the Grizzlies. We NEED good cops to step up and make sure other cops are not abusing their power.

“There have been too many Black lives taken by police that could have been prevented. You may see me as just a basketball player and I may lose fans for taking a stand, but I won’t stay silent.

“BLACK LIVES MATTER!! Where’s the justice for Breonna Taylor?? And the other countless innocent Black lives that have been taken at the hands of dirty cops with no convictions?”

The 20-year-old South Carolina is expected to join his teammates in the so-called bubble when the NBA season picks up.

NBA players are expected to resume their season on July 30. Twenty-two teams will be confined to the Disney Wide World of Sports complex in Orlando, Florida to play out the regular season through the playoffs and onto the NBA Finals, expected to take place in October.

Though players had expressed their reluctance to return to play as the nationwide protests continued on police brutality. Some were also concerned about the wisdom of playing during the coronavirus pandemic despite a 113-page manual of protocols that players and staff will have to follow at the complex. Sixteen players have tested positive already for the COVID-19 virus.

To address player concerns about using their platform as a vehicle for social justice, NBA Player Association president Chris Paul told the Undefeated that NBA players may be able to wear social justice or charity messages on the back of their jerseys instead of their names.

“We’re just trying to continue to shed light on the different social justice issues that guys around our league continue to talk about day in and day out,” Paul said. “People are saying that social justice will be off of everybody’s mind in Orlando. With these jerseys, it doesn’t go away.”