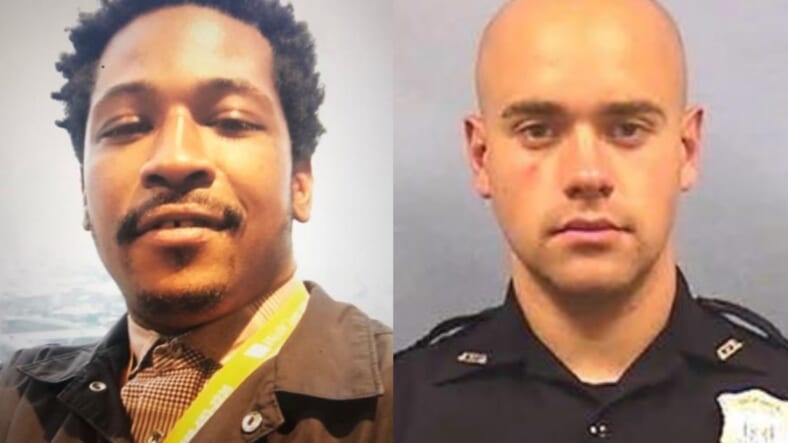 Garrett Rolfe, the Atlanta police officer who shot and killed Rayshard Brooks, has been released on a $500,000 bond.

Rolfe shot Brooks after the man had fallen asleep in the drive-thru of a Wendy’s restaurant on June 12.

The bond hearing was conducted during a video conference in Atlanta on Tuesday. Rolfe attended via video but did not speak. However, Tomika Miller, the widow of the slain man, spoke in opposition to the bond request. Tearfully, she said that Rolfe posed a danger to society.

According to CBS News, Miller sobbed saying, “My husband did not deserve to die, and I should not live in fear while waiting for the man who killed my husband to be tried in court.”

She went on to say that her life has been “completed turned upside down,” since the shooting which occurred on the birthday of the couple’s daughter, and the day before their wedding anniversary.

Judge Jane Barwick thanked the woman for her bravery in speaking to the court, however, she emphasized that the issue at hand was not “whether this defendant is guilty of these charges.” She ruled that the former officer was not a risk to the community, and was entitled to bond.

Rolfe is facing 11 charges in relation to the shooting including felony murder.

Brooks shooting death has added to ongoing police protests in the city of Atlanta where protests began following the killing of George Floyd in Minneapolis on May 25.

Judge Barwick required that Rolfe be required to wear an ankle monitor, obey a curfew, surrender his passport and any weapons, and have no contact with other officers or family members of victims.

Since the shooting, Atlanta mayor, Keisha Lance Bottoms signed a series of orders requiring officers to utilize de-escalation before deadly force. The order also says that if other officers are present, they have a duty to intervene when witnessing their colleagues using deadly force.