Tomika Miller, Brooks’ widow, wore an all-white dress, others came in Black Lives Matter T-shirts and masks in honor of the occasion. 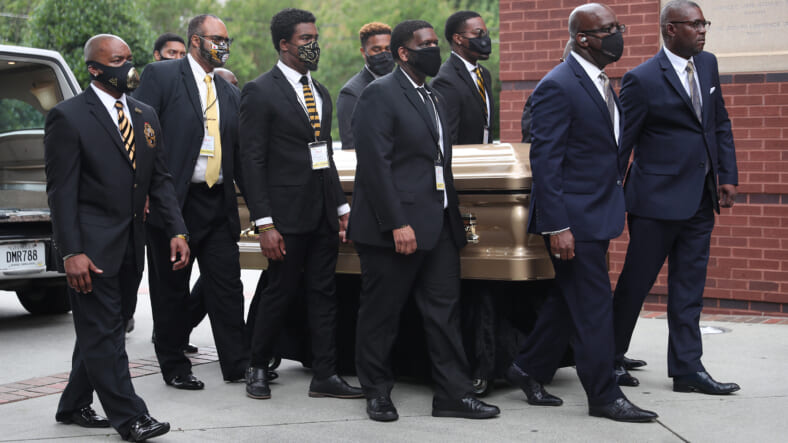 Pallbearers bring the remains of Rayshard Brooks to the Ebenezer Baptist Church for his funeral on June 23, 2020 in Atlanta, Georgia. Brooks was killed June 12 by an Atlanta police officer after a struggle during a field sobriety test in a Wendy's restaurant parking lot. (Photo by Joe Raedle/Getty Images)

The rain did not stop hundreds of people from attending a public memorial for Rayshard Brooks on Monday.

Outside of the historic Ebenezer Baptist Church in Atlanta, they lined up with masks to say goodbye to the 27-year-old gentleman who lost his life tragically in a police-involved shooting outside of a Wendy’s fast food restaurant on June 12.

Brooks’ death has caused public outrage, as it seems to be another example of excessive policing gone awry. This, coupled with the deaths of George Floyd and Breonna Taylor, has sparked a national call for police reform. Two of the officers connected to the killing have been charged and officer Garrett Rolfe, the officer who shot him, has been terminated.

Rolfe will face 11 charges, one of which includes felony murder. Should he be convicted, he could possibly get life without parole or the death penalty. 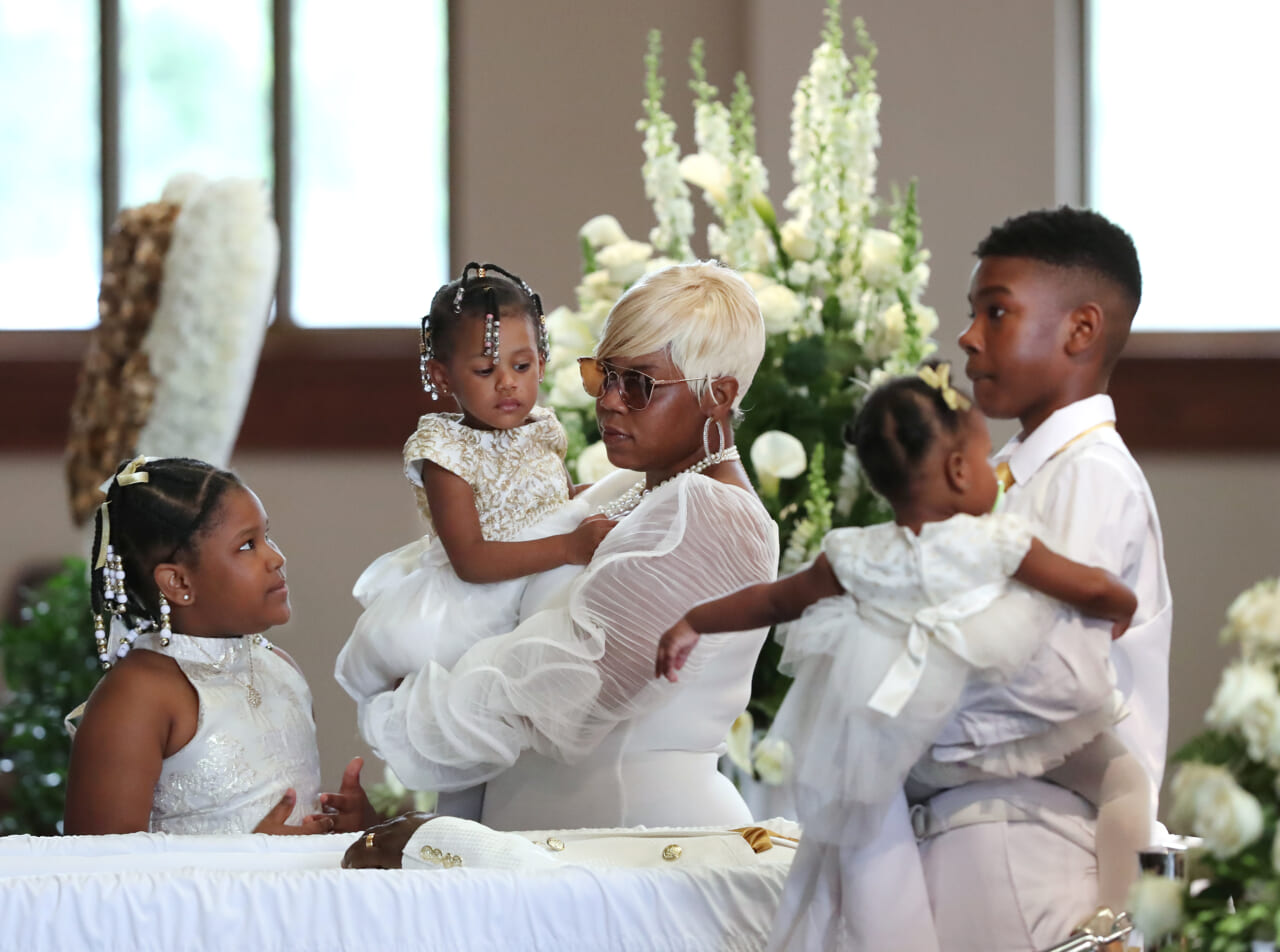 Tomika Miller, wife of Rayshard Brooks, holds their 2-year-old daughter Memory while pausing with her children during the family processional at his funeral in in Ebenezer Baptist Church on June 23, 2020 in Atlanta. (Photo by Curtis Compton-Pool/Getty Images)

Devin Brosnan, the other officer connected with Brooks’ demise will face lesser charges.

The shooting has struck a nerve in many within the African American community and the Black Lives Matter movement, which explains the long lines at Brooks’ memorial.

According to NBC News, the four-hour public viewing started on Monday around 3 p.m.

While Tomika Miller, Brooks’ widow, wore an all-white dress, others came in Black Lives Matter T-shirts and masks in honor of the occasion.

The memorial was not be the only goodbye send-off for Brooks. Tuesday, June 23, the family hosted loved ones and dignitaries to celebrate his short life during a private funeral. Rev. Bernice King, the daughter of Martin Luther King, Jr., spoke, while Rev. Raphael Warnock, the Senior Pastor of Ebenezer, officiated and dis the eulogy.

NPR received an excerpt from Warnock’s speech and it is rich with the weight of the time, while endearingly remembering the man.

“Rayshard Brooks wasn’t just running from the police. He was running from a system that makes slaves out of people,” the speech reads. “A system that doesn’t give ordinary people who’ve made mistakes a second chance, a real shot at redemption.” 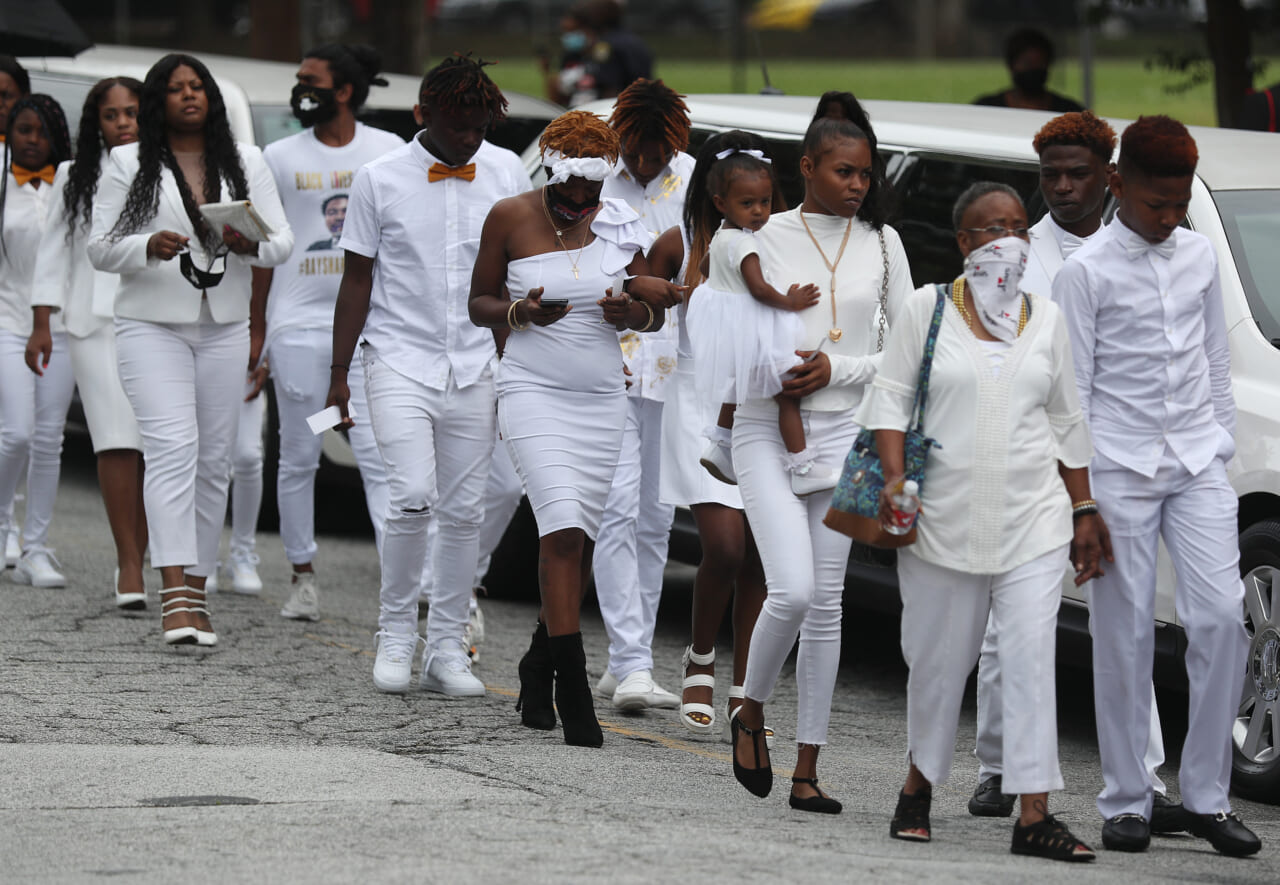 Mourners arrive for the funeral service for Rayshard Brooks at the Ebenezer Baptist Church on June 23, 2020 in Atlanta, Georgia. Brooks was killed June 12 by an Atlanta police officer after a struggle during a field sobriety test in a Wendy’s restaurant parking lot. (Photo by Joe Raedle/Getty Images)

The people were ministered by Tamala Mann, who offered her heart-opening gospel single, “Take Me to The King.”

The song speaks of a believer who is at his or her’s wits end with the stress of trauma around her. The climax of the song “Truth is I’m tired … time to make a change.”

For the Black community, the need to hand the burden of systemic racism over to some Higher Power to move it toward eradication is real. Her words are sure to heal a family aching from the horrific culmination of the valuable life of their beloved.