The rally brought out over 700 people, including children and their parents, who marched with the support of the local police 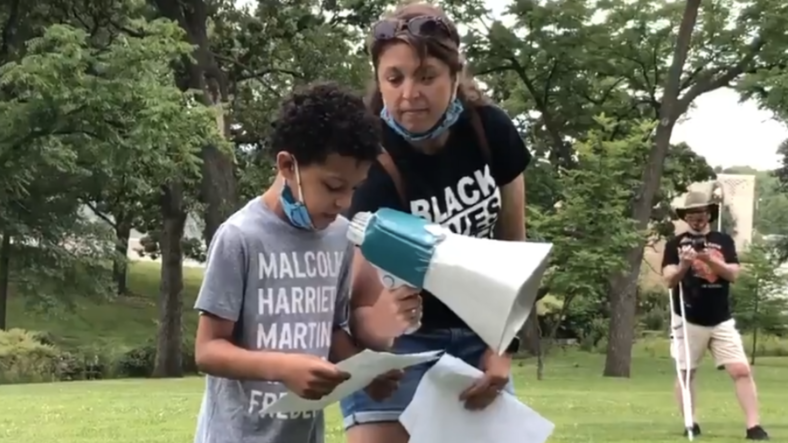 Eight-year-old Nolan Davis led a march for hundreds of children in his Kirkwood, Missouri community on last Saturday, June 27.

“I’m worried about Black people, like me, getting hurt. Some skin is like chocolate. Some is like vanilla. Some is mixed together like mine. But we’re all people,” Davis said through a megaphone according to CNN.

Davis, who is Black, is adopted along with his five-year-old sister, Caroline. Their parents, Kristin and Ryan Davis, have been participating in rallies in the St. Louis area since the May 25 police killing of George Floyd in Minneapolis.

Nolan joined his parents at some of those rallies and had the idea to plan one just for children.

Kristin Davis told The Washington Post that she began seriously thinking about race after adopting Nolan eight years ago. Now, she said she co-chairs the racial equity committee at her children’s school, and takes cues from Black parents about how to raise her children.

She said that it is difficult to explain to her children the greater issues of systemic racism in America that contribute to police killings. However, her once her son had an understanding of some of what was going on, he “wanted to speak out more for the rights of people who look like him.”

The rally brought out over 700 people, including children and their parents. They marched from a local park to a neighboring shopping district with the support of the police in the community.

Today’s Black Lives Matter march in Kirkwood was amazing. We are very proud of Keysor kid Nolan Davis for using his voice and organizing the march. This is what community looks like! ?❤️ pic.twitter.com/R2T5lZVxAN

Upon returning to the park, the children drew hopeful messages on the ground in chalk.

Join @BigBird, @Elmo and @AbbyCadabbySST from @SesameStreet for Coming Together: Standing Up to Racism, a CNN/Sesame Street Town Hall for kids and families, Saturday morning at 10 a.m. ET pic.twitter.com/izMHtf4QHq

On Saturday, June 6, CNN and Sesame Street aired, Coming Together: Standing up to Racism. The beloved children’s characters explained the peaceful protests taking place around the country. In it, Elmo’s dad made his debut where he explained, “Not all streets are like Sesame Street.”

“Not all streets are like Sesame Street. … What we are seeing is people saying ‘enough is enough.’ They want to end racism.”@Elmo’s dad Louie explains why people are protesting across the US. https://t.co/icV04F4FNW #CNNSesameStreet pic.twitter.com/1efrMAzZ8V

The following week, the network and Sesame Street teamed up again to explain the coronavirus pandemic to kids with The ABCs of COVID 19: A CNN/Sesame Street Town Hall for Kids and Parents.