The financial guru and entrepreneurship coach launched #MyBlackReceipt to document the support of Black-owned businesses. 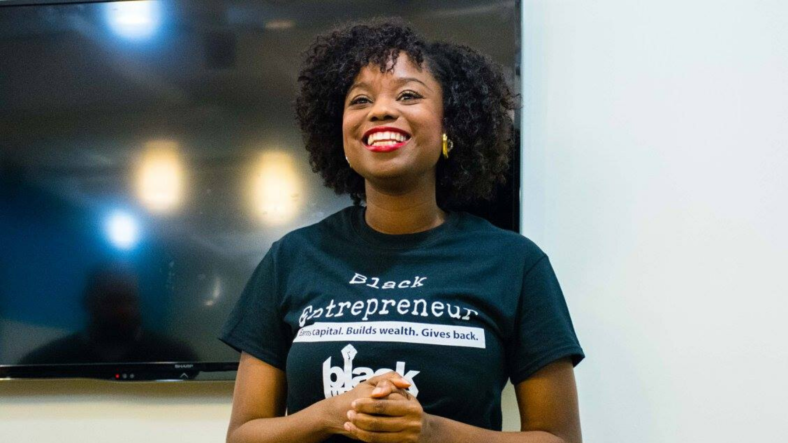 Calls to buy Black echo across social media after a company or brand does something problematic. For example, Spike Lee called for a boycott of luxury brands, such as Gucci and Prada, following a blackface scandal. As these labels are “canceled,” social media hashtags and posts amplify Black-owned brands but are people putting their money where their mouth is?

READ MORE: Why the buying Black trend should be a permanent lifestyle

Kezia Williams, CEO of The Black Upstart and curator of financial wellness in Black communities, got the idea to launch #MyBlackReceipt to have data to reflect trends in spending and support of Black-owned businesses.

“There’s been buy Black campaigns in response to corporate misbehavior. So whether it’s putting the boy in the ‘Coolest Monkey in the Jungle’ T-shirt, whether it’s Starbucks treating Black customers like criminals, people are always buying Black in response to protest and we really need to figure out a way to make this a practice,” Williams tells theGrio.

This is how #MyBlackReceipt was born. Williams say she reached out to one of her tech friends and asked them to build “tech tool” that would count Black receipts.

“He’s crazy, like me, so he said yes. I don’t know why,” she explains. “We wanted to get it out by June 19. We had two weeks to try to figure this out. I was like, ‘I’m gonna put together a team. I’m going to call up, you know, just different people that actually might be public advocates of this movement, and I just need to work with you to actually build this tool.’

She adds, “The goal of the tool was to get people to submit their receipts, to input the business name, to input the purchase amount and buy Black over initially a 15-day period. It [has been] extended to a 17-day period, and just consistently find opportunities to spend Black dollars in Black spaces.”

Williams, a forward thinker in circulating Black dollars in Black communities, get her start in the world of entrepreneurship during her own professional journey. She learned through experience that the traditional path of high school, college, and then a corporate career was not the gateway to her definition of success.

“I followed that blueprint but what was missing from that narrative was how painful it can be to be Black, and employed in a majority [white] workplace,” says Williams. “For six years I worked as a government contractor and there were times where employment was amazing and there were other times where I definitely felt as though my aptitude wasn’t being measured equally with other employees.”

She continues, “I was writing national-level security reports that would be seen by the National Security Council, and other higher leve, government agencies. I ended up with a white female boss. She came in, and again, I’ve been working there six years at this point, she took a look at my resume and she decided because I did not have an advanced degree that I was not qualified to do work that I had to do on for the past six years. And so I was demoted.”

From there, she left that role and ended up working at the United Negro College Fund, assisting with the launch of a $25 million initiative. As the CEO of the Black UpStart, Williams educates on not only how to start a business but have the means and opportunity to employ other Black people.

“The project called for Black undergraduate students to learn how to start a business before they graduated from school, and in exchange for that we awarded up to $20,000 in scholarships. So, went on the road, tried to recruit students to be a part of the program, and the students were totally not interested,” explains Williams. “I would ask if they wanted to be an entrepreneur and they were like, ‘What does that mean?’ I’d ask who wanted $20,000 in scholarship support and the students would say, ‘Oh my gosh, I want it.'”

She continues, “When I concluded my presentations, it was always the moms the dads, brothers, sisters, aunts, uncles who really wanted to find out more information about the entrepreneurship program. I believe a big reason for that they had experienced the same kind of employment that I had. Especially Black women who will lose $840,000 over their working careers, not because they’re not twice as smart, not because they don’t work twice as hard, but simply because they are Black and they are women. I went back to UNCF and I asked them if this was an idea that I could explore outside of work, and they gave me their full blessing, and [in] November 2015, I started Black Upstart.”

Through Black Upstart and her social media platforms, Williams advocates for financial literacy in Black communities, including building wealth, creating businesses and creating jobs, and investment. With #MyBlackReceipt, she was able to collect valuable data.

“We are counting the dollar. Instead of asking everyone to buy Black, and not knowing if anyone actually did it, we are counting each receipt in aggregate,” says Williams. “So we are adding a receipt submitted in Little Rock, Arkansas, with a receipt submitted from a Black-owned business in Virginia, with the receipt submitted from a Black-owned business in Washington D.C. We add in a public counter, so think Color of Change, one signature is significant, especially if it’s in support of a cause. When you add one signature with another 398 signatures that’s 399, add 5000, that’s 5399. All of those signatures coming together show collective impact.”

She continues, “For us, all of these receipts coming together show the collective impact consistently for Black-owned businesses over a specified period of time. Right now we have over, 19,000 people who participated in this campaign and we have $7.4 million in receipts and invoices uploaded to the system.”

To launch #MyBlackReceipt Williams reached out to her colleague, Torrence Reed, CEO of Zoom Technologies. The twosome and a few others worked to reach an ambitious goal of $5 million spent with Black businesses, recorded in just 17 days. The campaign successfully passed its goal, but Williams initially had some nerves.

“The first 12 hours of the campaign there were a lot of fears behind that,” Williams says. “We sent out an email to our listserv of over 40,000 people and our site crashed, and it was out of commission for another 12 hours. Keeping in mind that this is a 17-day campaign, so that’s one whole day gone if you add both of those 12-hour periods. Part of me, to just be quite honest, just felt like failure could actually happen and as much as there’s talking points around failing forward. When you fail forward and fail publicly, yes, you learn a lesson, but that doesn’t mean that that lesson was an easy one.”

She adds, “I continued every single day to just have a small mustard seed of faith that we could get there. I told myself even if we did not reach $5 million, even if we got 4.9999 million, the fact that there were thousands of people who woke up at one point said, ‘Not only am I going to buy Black, I’m going to save my receipt, fill out this incredibly long form, upload it because seeing that counter push towards this goal is important to the collective. My individual contribution can really meet this goal.’ So when we hit 5 million, I actually ended up calling up Torrence and I was like, ‘Bro we did it.’ I couldn’t believe this. Both of us literally just had a moment and we were just so grateful for an opportunity.”

READ MORE: An open letter on racism in philanthropy and the trials of a Black founder

Through all of her work, Williams aims to provide knowledge and access to financial education to Black communities. Although the core of her platforms provide resources and tools, she understands the need to dig deeper for generational results.

“I could get into the nitty gritty on what exactly we need to know in order to be financially literate, but if your mind is not right, if your mind is not an asset, any money that becomes available to you will be a blank check for other communities to sign,” ,” says Williams. “So I think it starts with changing our mind first, and when we change our mind we can change our behavior. We change our behavior, we can change our systems and I think when we change systems like racism, discrimination, sexism, all of that is systemic, when we can change the system I think that’s when we can make change from the inside out.”