Black Players for Change lead protest at MLS is Back tourney

Players stood, fists raised, for 8 minutes and 46 seconds, the time that has become a symbol of police brutality 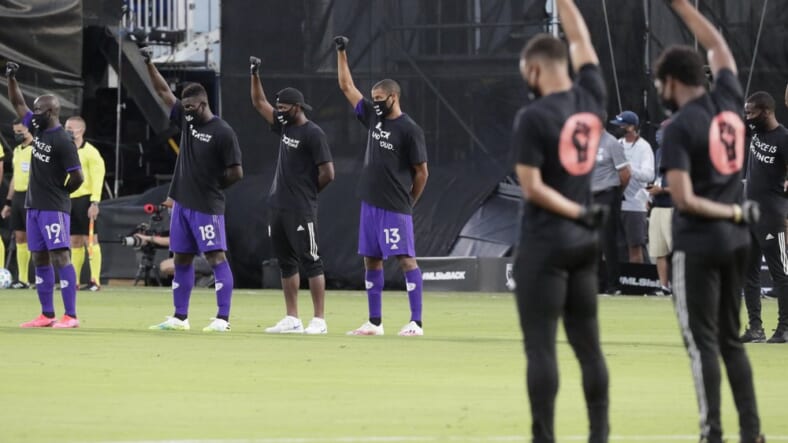 Orlando City players, left, raise their fists in the air in solidarity with other MLS teams before the start of an MLS soccer match, Wednesday, July 8, 2020, in Kissimmee, Fla., while wearing shirts and masks with messages about race. (AP Photo/John Raoux)

Black Players for Change made its first public demonstration since coming together last month at Wednesday night’s opening game of the MLS Is Back tournament in Florida.

Players stood, fists raised, for 8 minutes and 46 seconds, the time that has become a symbol of police brutality, after a Minneapolis police officer had his knee on George Floyd’s neck when he died. More than 170 Black players, some wearing “Silence is Violence” T-shirts and Black Lives Matter face masks, took part in the pregame protest.

Black Players for Change sprung from an Instagram group started by Morrow after the death of Floyd. The death sparked protests worldwide against racism and policy brutality.

Portland’s Jeremy Ebobisse, Chicago’s CJ Sapong, Nashville’s Jalil Anibaba, NYCFC’s Sean Johnson and Colorado’s Kei Kamara are among some of the other players involved. The group has the endorsement of both MLS and the players’ association.

“It was very powerful to put my fist up and to be there on the field with so many people that are trying to make a change in this country. And that’s what we need to do,” Inter Miami’s Juan Agudelo said.

It has also discussed developing the game in black communities and partnering with charities, and has already secured $75,000 in charitable contributions from the MLS Players Association.

“This moment for us as a black player pool, is that we can stand up, we can make this statement that’s come completely from us. It was so important that it was player led, it couldn’t have worked the other way around,” Morrow said. “This moment of solidarity with our brothers and sisters fighting this battle for racial equality and human rights is so important. And we want to make sure that the narrative was player led, player driven in coming strictly from us.”

The Players Coalition partnership allows the two groups from different sports to share resources in a common goal. The NFL group, which aims to address social justice and racial inequality, was started in 2017 after team owners objected to players kneeling during the national anthem.

“The commonalities and goals of both our organizations presented a natural opportunity to align,” Boldin said in a statement. “I am excited to continue the growth of Players Coalition as an opportunity for all athletes across all professional sports leagues to make a significant impact in our communities.”

Players Coalition reached out to the MLS players upon hearing about their group.

“All of these people are reaching out to us, wanting to help us, and that just gets to what we’re doing here, Morrow said. ”We’re putting together something really solid, an organization that is here for future generations, here to make lasting change in Major League Soccer and in our communities.”