Portland businesses report $23 million in damages amid protests, according to survey

Officials say much of the lost revenue is tied to coronavirus closures. 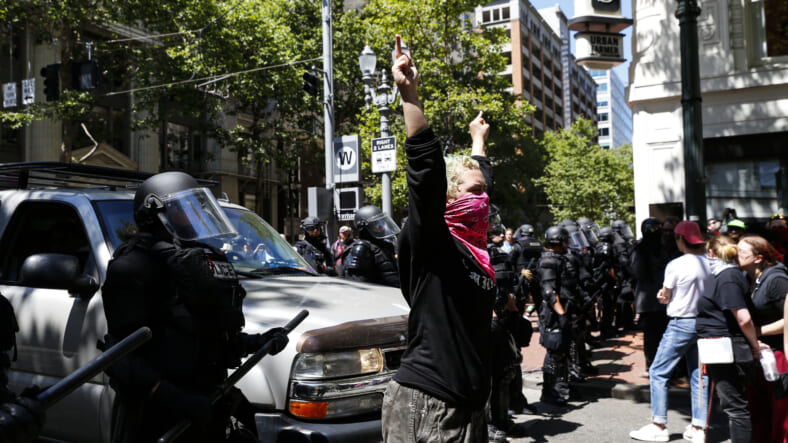 An unidentified Rose City Antifa member flicks off to the police during a demonstration between the left and right at Pioneer Courthouse Square on June 29, 2019 in Portland, Oregon. (Photo by Moriah Ratner/Getty Images)

A new survey shows that many businesses in downtown Portland claim protests in the city have caused a loss in revenue. Officials say much of the lost revenue is tied to coronavirus closures.

The $23 million loss estimate originated from the Portland Business Alliance‘s protest-related survey of 91 businesses from June 1 to June 18.

Protests against police brutality have lasted for more than six weeks in the city.

Almost 90% of the reported loss came from Pioneer Place Mall. They reported that from May 31 to June 18 they experienced $2.5 million in damages and $18 million in lost sales.

Many malls, including those in Multnomah County, couldn’t reopen until June 19 due to the coronavirus pandemic. The shopping center reopened on June 23.

The 90 other businesses that responded to the survey reported a combined $2.3 million in damages amid the first three weeks of demonstrations. Seven businesses reported $407,000 in lost revenue, but many respondents noted that they were already closed because of COVID-19 restrictions and attributed their lost sales due to the demonstrations as $0, according to Oregon Live.

“This was a voluntary survey,” said Amy Lewin, a Portland Business Alliance spokesperson. “It is not scientific and not the most fully accurate account of losses. It’s the floor or first check of estimates.”

The Portland Business Alliance says the survey was a way for city officials to get an idea of the financial impact of demonstrations in the city.