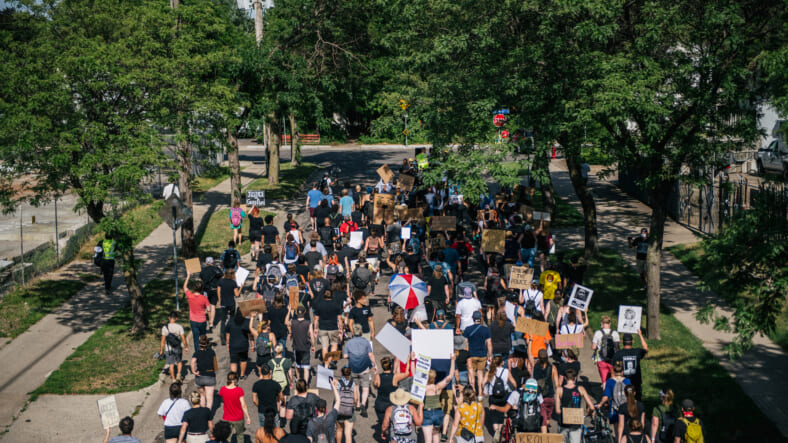 People march in the street during a demonstration on June 25, 2020 in Minneapolis, Minnesota. (Photo by Brandon Bell/Getty Images)

As demonstrations against police brutality and white supremacy continue across the country, the federal government is reportedly finding new ways to deter protesters in Portland, Ore.

Federal officers are using unmarked vans to track down and detain protesters, according to NPR.

As early as Tuesday, federal officers have been dressing in camouflage, riding around Portland in unmarked vehicles and arresting protesters whom they believe either committed acts of violence, destroyed property or are persons of interest in an investigation.

READ MORE: Portland businesses report $23 million in damages amid protests, according to survey

Two such protesters, Mark Pettibone and Conner O’Shea, said they experienced this first hand on Wednesday while leaving a rally at the Multnomah County Justice Center and Mark O. Hatfield Federal Courthouse.

As they were heading home after 2 a.m., an unmarked minivan approached them. Prior to that, the protest was peaceful and a few law enforcement agents were present.

Acting Deputy Secretary of Homeland Security Ken Cuccinelli confirmed the news that federal agents were in fact detaining people in Portland using unmarked vehicles. He stated that it was to move the detainees to a “safe location for questioning,” as well as a method to keep officers safe from the crowds.

He spoke of one incident where the agents had picked up someone under suspicion of attacking a federal officer. After questioning the gentleman, that they realized they had the wrong guy and released him.

“I fully expect that as long as people continue to be violent and to destroy property that we will attempt to identify those folks,” Cuccinelli said.

“We will pick them up in front of the courthouse. If we spot them elsewhere, we will pick them up elsewhere. And if we have a question about somebody’s identity, like the first example I noted to you, after questioning determine it isn’t someone of interest, then they get released.

“And that’s standard law enforcement procedure, and it’s going to continue as long as the violence continues,” he said.