Washington’s NFL team will go without nickname for upcoming season 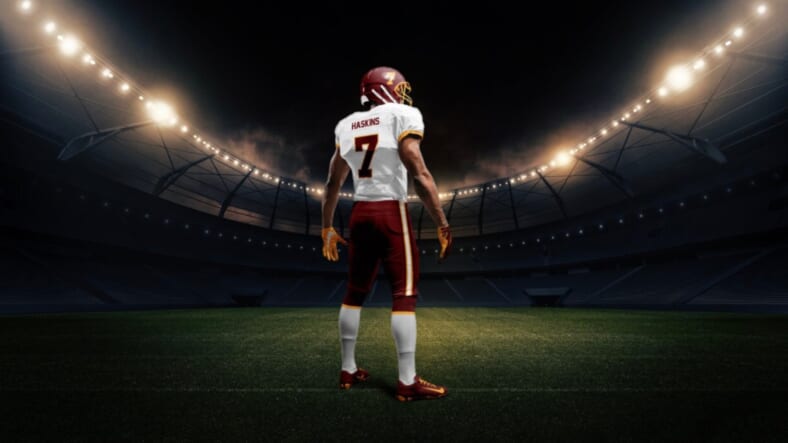 The Washington Redskins unveiled a new uniform as they announced they would play without a nickname this season. (Photo: Washington NFL team)

The Washington football team uniforms will remain burgundy and gold. They will also be without a team name. Player numbers will now be on their helmets instead of the team logo.

The team had been the Washington Redskins for 90 years and was under fire for its name for some time, but owner Dan Snyder repeatedly refused to change the team’s nickname.

Now he and newly installed head coach Ron Rivera say they are looking for a name that can honor Native Americans and the military, according to NBC Sports Washington.

This year, after global protests following the death of George Floyd, Synder was pressured by numerous investors including FedEx which owns the naming rights to FedEx Field in Landover, Maryland where the team plays.

This decision not to go with a new team nickname was met with both amusement and scorn as sportscasters like ESPN’s Max Kellerman and even NBA player LeBron James weighed in.

“You couldn’t see it coming?!” Kellerman said when the news broke today. “You couldn’t see that having a racist epithet for a team name was not going to last and you have nothing right now?”

Names that have been suggested to replace “Redskins” are Washington Warriors, Washington Red Wolves, and one popular option that would seem to at least fulfill the military requirement, the Washington Red Tails. It would be named after the Tuskegee Airmen, the all-Black fighter squadron that became world-renowned for their heroic exploits in World War 2.

The Washington NFL team also generated controversy recently when 15 female former employees alleged that the organization created a toxic atmosphere of sexual harassment and misconduct. All of the men allegedly involved including Larry Michaels, the voice of the team for 16 years, either retired or were let go.