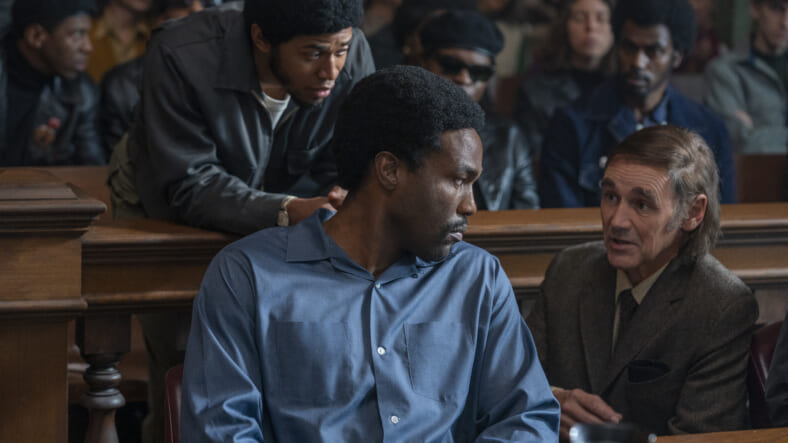 Netflix just released the first look at their upcoming film The Trial of the Chicago 7 led by Yahya Abdul-Mateen II and Kelvin Harrison, Jr. and we are already shook.

Written and directed by Academy and Emmy award winner Aaron Sorkin, the film is based on a true story about a peaceful protest in 1968 that feels like it could have been snatched from today’s headlines.

Read More: Yahya Abdul-Mateen II and Jeffrey Wright star in ‘All Day and a Night’

What was intended to be a peaceful protest at the 1968 Democratic National Convention turned into a violent clash with police and the National Guard. The organizers of the protest—including Abbie Hoffman, Jerry Rubin, Tom Hayden and Bobby Seale—were charged with conspiracy to incite a riot and the trial that followed was one of the most notorious in history.

Check out a few photos from the film:

Considering the fight our community is facing today, one of the best things we can do is look back on our history and reflect on those who came before us. Sorkin has a long list of incredible projects under his belt and his unparalleled eye and the urgency of the story he’s telling are sure to result in an unmissable film.

We can’t wait to see what Abdul-Mateen brings to the table after his show-stopping performance in HBO’s The Watchmen, we know his talent is worth the wait.

The Trial of the Chicago 7 hits Netflix on October 16.