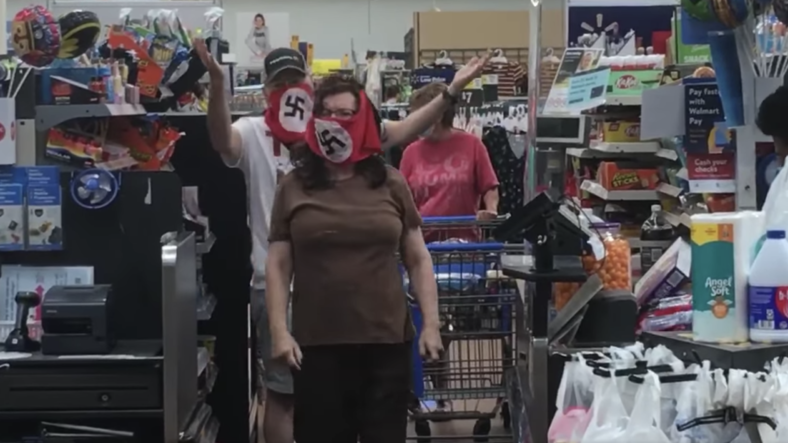 A couple shopping at a Walmart in Minnesota decided to wear masks with Nazi swastikas on them as a silent protest against presumptive Democratic presidential candidate Joe Biden.

The two were confronted at the checkout by other customers, who advised them not to wear the masks that carried so much racist history.

That, however, did not stop them from parading around in the masks, even as they were getting items checked out on their way out. The unidentified woman even went as far as trying to clear up her reasoning for wearing the mask.

“If you vote for Biden, you’re going to be [living] in Nazi Germany. That’s what it’s going to be like,” the woman said in a video posted to Facebook by Raphaela Mueller.

“You’re sick,” a man, recording the scene on cellphone video, can be heard saying. The woman threw up both middle fingers in response to the attention she was bringing. “You can’t be American and wear that mask.”

“You’re literally wearing a Nazi flag right now,” another woman can be heard saying off camera.

“We literally had a f–king war over this. The Nazis lost. Please, don’t wear those masks,” the cameraman man said. “You cannot call yourself an American.”

The woman wearing the face covering continued defending her mask as customers criticized her about wearing it inside the Walmart.

“I’m trying to tell you: If you vote for Biden, you’re going to have socialism,” she exclaimed.

Police officers were eventually called to the scene, TMZ reports.

According to the Star Tribune, the couple was served trespassing notices and told they could not come back to the store. If they did, they would be arrested.

The couple decided to go on about their day and weren’t charged in the incident.

Mueller, who shared the video on the social platform, went back on her Facebook page to send a message to her followers as to why the couple’s masks were so problematic.

“I was born and raised in Germany, and I grew up hearing about my great-grandmother who fought in the underground against the first wave of Nazis in the 1930s and 40s,” she wrote. “Let me make this abundantly clear once and for all – THE SWASTIKA IS A HATE SYMBOL AND YOU DO NOT FLY THE FLAG, YOU DO NOT WEAR THE SYMBOL ANYWHERE ON YOUR BODY, YOU DO NOT USE OR DEFEND THIS SYMBOL, EVER. END OF STORY.”