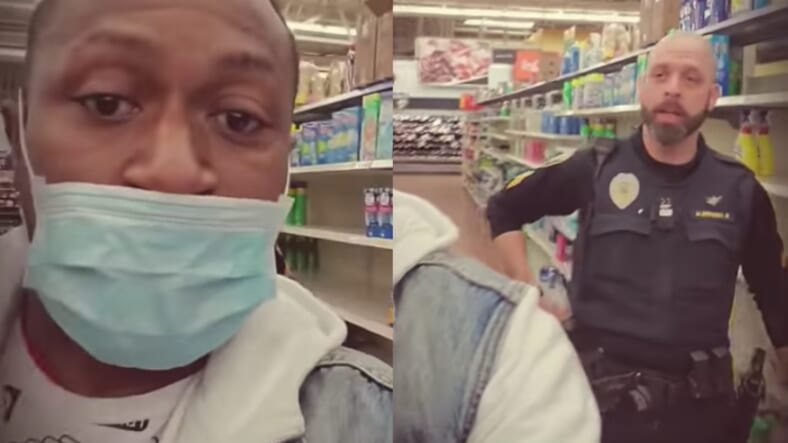 Two Black men say they were forced out of a Walmart in Illinois in what they describe as an act of racial profiling.

Last month, the men posted a YouTube video that shows them donning surgical masks inside a Wood River Walmart while they are being trailed by a police officer. The officer asks the two men —Jermon Best and Diangelo Jackson— to remove the masks as they are not permitted under store policy.

READ MORE: Louisiana father claims he was arrested outside of Walmart for cursing at son

Best recorded the exchange and said he posted it to show people what life is like for young Black men in his area of the country.

“I don’t know this guy personally,” Best said, according to The Telegraph. “We just want to shine some light because this happens so often.”

“I don’t know if he was having a bad day,” Best added. “I’ve never said that the guy was racist. All I’m saying is that his actions were suspect.”

Wood River Police Chief Brad Wells, however, said the posted video doesn’t show the men telling the officer that he was harassing them, even before the officer approached them. And Wells added that at the time the men wore the surgical masks, most people weren’t wearing anything over their face to help ward off the novel coronavirus.

“They immediately went into the race issue,” Wells told The Telegraph. “He (the officer) didn’t kick them out of the store or refuse entry.”

Wells did, however, say the officer was “mistaken” about the “store’s policy prohibiting masks” and called it the “one error” the officer made in the incident.

Best said he and Jackson ultimately followed the police order to remove the masks but that they left the store shortly after.

“Being a young African American male, it’s kind of hard when you interact with the police because you don’t know what state of mind they’re in,” Best said, according to the newspaper.

Jackson said “just watching a lot of videos of police officers abusing their authority towards people was keeping me afraid, wondering why this cop was harassing us.”

”I was just more worried about him doing something he’s not supposed to do,” Jackson added.