The former NBA player is dishing on on his iconic crossover, life in the NBA bubble and the release his new shoe 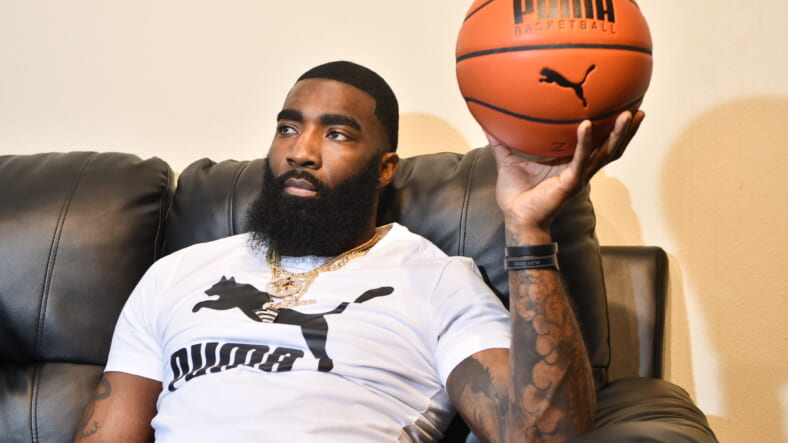 God Shammgod played in the 20 games in the NBA but his legacy in the game of basketball is something that has forever changed the game.

theGrio caught up with him on Instagram Live on Saturday for #TheGrioCrossover as he is in his third season with Dallas Mavericks as a player development coach. Shammgod is currently down in the NBA bubble in Orlando, FL, as the team competes for a chance to bring an NBA title back to Dallas.

The former NBA player dished on his legendary crossover, his impact on the game of basketball, life in the NBA bubble and the release his new shoe.

According to Shammgod, the NBA bubble (where coaches, players and staff are quarantining due to the coronavirus pandemic) is not that different from his normal activities. The basketball coach is working on a few new skills however, including golf, boating and fishing.

“I have yet to go fishing,” he explained. “I need to because I never fish. Tomorrow, I’m supposed to go with Daryl Armstrong for my first golf lesson. So, you know, this is going to be an experience.”

The bubble has faced criticism in regards to it not being a safe environment and a possible distraction towards the advancements of the many social justice causes in the world. Shammgod believes that the NBA is doing great job making sure that the advocacy for social justice issues is not being lost.

“I think the NBA has always done an amazing job, for the culture and for the people as far as pushing things forward,” he stated. “Whether it be the teams—for us we got [Dallas Mavericks owner] Mark Cuban, who’s a great advocate, who always put himself out on the front line for the people. We are just embracing this challenge for the next step. In all actuality, we are now living in history. This generation, we are living in a part of history so we’ve got to embrace it and make it better.”

Shammgod has served as a player development coach for the Dallas Mavericks for three seasons, focusing on developing dribbling and ball handling. His legendary move, signature crossover “The Shammgod,” has been used by some of the best ball handlers in the league.

“Imitation is the best form of flattery for somebody that only played 20 games in the NBA and it made a mark. I couldn’t think about this in my wildest dreams” he shared.

The origin of the move came by accident while Shammgod was playing in the Big East Tournament, but quickly became a secret weapon for all hoop fans and players.

Shammgod has received high praises from various NBA staff, including Cuban who said that he is a “natural born leader.” With this role, it definitely feels like Shammgod is walking in his purpose. As a player development coach/defensive coach he is responsible for skill work, such as dribbling, shooting, passing and more.

”I love the personal time and the connection with the players. Players become my family, it’s more than like a trainer-player or coach-player [relationship],” the player development coach explained. “You know, I just embrace every aspect of it because you have to train the mind. You have to train the mind to train the body. You can’t make people robots. You gotta give them their own independence. So I’ll give you enough stuff where you could just keep growing from what I’m showing you.”

In addition to his coaching responsibility, the crossover king recently partnered with Puma for his own shoe.

“Everything with my shoes is like my life,” he shared.

The shoe features the color of his high school, his name, a concrete design symbolizing the concrete jungle, as well as his favorite pair of Jordans and instructions on how to do his legendary move. The shoe is officially out now with plans of another shoe launching in September 2020.

Fans can keep up with the Crossover King himself on social media @theshammgod.