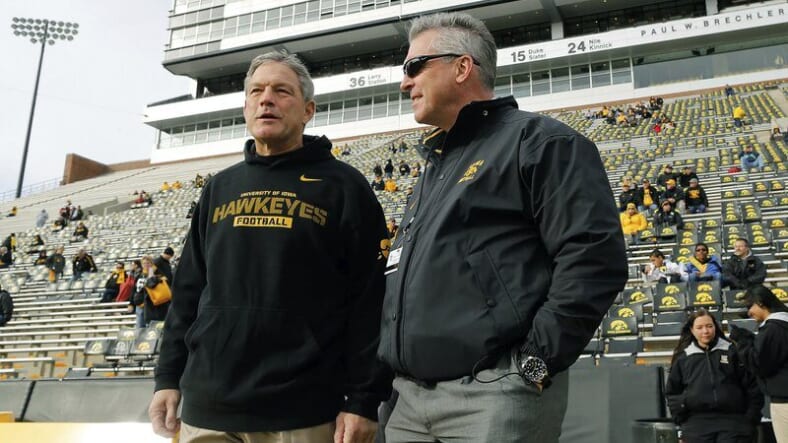 IOWA CITY, Iowa (AP) — Facing a scathing report that detailed racial bias against Black players in his program and bullying behavior by some of his assistants, Iowa coach Kirk Ferentz said Thursday he would not be making any staffing changes as he apologized and promised to overhaul some of his policies.

University of Iowa President Bruce Harreld said the critical report by an outside law firm showed the “climate and culture must and will change within our football program.” Ferentz apologized to former Black players at a news conference and promised to build on changes made in recent weeks to improve their experience.

“This review brings us face-to-face with allegations of uneven treatment, where our culture that mandated uniformity caused many Black players to feel they were unable to show up as their authentic selves,” Ferentz said. “I want to apologize for the pain and frustration they felt at a time when I was trusted to help each of them become a better player, and a better person.”

The report said four unidentified current and former coaches — including at least two still on staff — were accused of bullying, demeaning and verbally abusing players and would be considered for potential disciplinary action.

Ferentz called the behavior unacceptable, saying it crossed the line from “demanding to demeaning.” But he said he thought that those responsible could make changes.

Iowa athletic director Gary Barta and Ferentz said that no football assistants, including Feretnz’s son, offensive coordinator Brian Ferentz, would lose their jobs. Barta said any punishments would be handled confidentially, in accordance with state law.

Barta also said that Kirk Ferentz, who has led Iowa since 1999 and is the longest-tenured head coach in college football, had his full confidence to lead the program. At the same time, Barta acknowledged that Ferentz’s philosophy, The Iowa Way, had become “perceived by many as ‘the white way.’”

The university hired the Husch Blackwell law firm in June to review the program after dozens of former players, most of them Black, spoke out on social media to allege racial disparities and mistreatment. Their activism came as protests against racial injustice swept the nation following the death of George Floyd and after attempts to raise concerns inside the program resulted in only minor changes.

Last month, the program cut ties with longtime strength and conditioning coach Chris Doyle, awarding him $1.1 million in a severance agreement. Several players had cited Doyle as the major source of their mistreatment, an allegation he has denied.

But the review, which included interviews with 111 current and former players and employees, found the cultural problems went beyond Doyle and were systemic.

Ferentz called Doyle an “outstanding coach” at Thursday’s news conference. But he said he erred in giving Doyle too many responsibilities that gave him tremendous power over players.

The report found that Black players were promised a “family atmosphere” during their recruiting, but found a different reality after they arrived in Iowa City. Many did not feel welcome or supported in the rule-bound program, where the ideal player “was built around the stereotype of a clean-cut, white athlete from a midwestern background.”

Players reported that they were long not allowed to wear “do-rags,” tank tops, earrings or other jewelry in the football building and were discouraged from getting tattoos or having certain hair styles. Coaches said the rules promoted a professional appearance, but Black players said they felt singled out, isolated and forced to suppress their personalities.

It was so widely known they faced extra burdens that several players and staff repeated a common saying to investigators: “If you make it through the Iowa football program as a Black player, then you can do anything.”

Ferentz eliminated rules on jewelry and hats and instructed his staff not to critique hair styles or tattoos last year after an athletic department review raised racial bias concerns. After meeting with players last month, Ferentz dropped other rules on personal appearance and his long-standing ban on their use of Twitter.

Black players cited instances where they faced harsher discipline than white players for similar infractions and other double standards. While they were told not to kneel during the national anthem, white players donned “Make America Great Again” hats and presented Donald Trump with a jersey during a 2016 campaign event, the report noted.

The report did not determine whether Black players were singled out for drug testing at a higher rate than white players, an allegation that players made but Ferentz denied. But it found that the program’s intense monitoring of players’ body weight and sleep patterns added to their anxiety.

Players who did not meet their target weights were constantly pressured to gain or lose pounds and those who didn’t get enough sleep at night — as measured by a sleep band they wore — could be “called out” during team meetings. Ferentz said he has taken steps to relax those rules as well.