Anti-masking controversies are nothing new 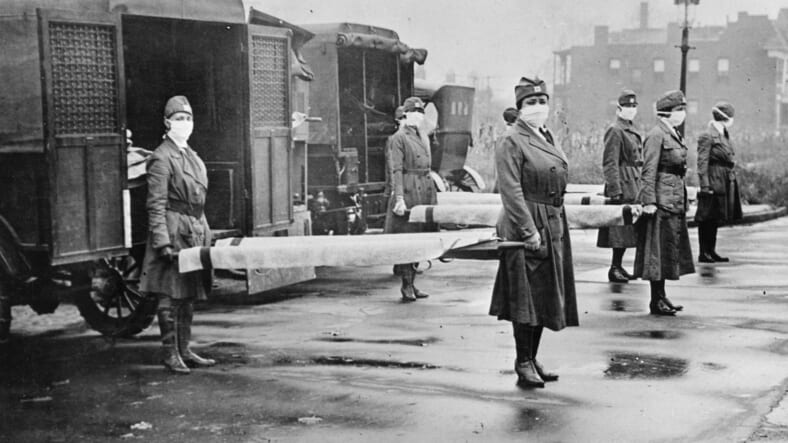 Nurses wear masks in the 1918 flu pandemic that killed millions.

Governors and mayors were not in sync over a virus that was killing hundreds of thousands. Large gatherings were prohibited and schools, bars and dance halls closed. Angry debates about mask-wearing sometimes became violent. Sound familiar?

All of those things were true during the 1918 flu pandemic which provides a lesson for those navigating the current one – that history truly does repeat itself. In March of 1918, the “Spanish” flu pandemic began when 100 soldiers at a Kansas military base got sick.

According to a story in the New York Times, anti-maskers were a factor in the previous pandemic as well.

San Francisco was the first U.S. city to mandate mask-wearing during the pandemic, reports the Times. By October of 1918, the city had 7,000 cases. But then, as now, citizens refused to comply with the order, citing government overreach and whether or not masking stemmed the rate of infection.

According to accounts of the day, Henry Miller, a San Francisco health inspector at the time, led an anti-masking blacksmith named James Wisser, who’d set up on the street to tell people not to wear masks, to the store to buy one. But the situation got out of hand and Miller shot Wisser, but only after Wisser hit him with a sack of silver coins.

Both men were arrested.

According to Business Insider, a popular ad at the time urged citizens to “Obey the laws, and wear the gauze, protect your jaws, from septic paws.”

Fines and 10 days in jail were handed out to those who refused to comply, so much so that the courts had a backlog. Though San Francisco’s initial ordinance ended after a month, it was reinstated by December when flu cases in the city began surging again.

By the end of the year, a bomb had to be defused outside of the home of San Francisco’s chief health officer, Dr. William C. Hassler.

“Things were violent and aggressive, but it was because people were losing money,” Brian Dolan, a medical historian at the University of California, San Francisco told The Times. “It wasn’t about a constitutional issue; it was a money issue.”

An Anti-Mask League was formed by a female lawyer who was quickly joined by others. They sought a repeal of the masking laws on the grounds of it being “unconstitutional” and that there was no scientific proof that wearing them worked.

In another lesson from history, the unpopular mandate and the defiance of it may have contributed to San Francisco being one of the American cities hit hardest by the virus. By the time the mandate was repealed in February, San Francisco registered 30 deaths for every thousand people, the Times reported.

If there’s any lesson that can be taken from the past, it’s that things and people don’t change as much as you would think. People in 1918 didn’t have the plethora of media outlets they do today but had much the same response. A public health crisis that led to uncertainty and financial distress generated very similar responses across a century.

What happened to end the 1918 flu pandemic? Social distancing and closing businesses helped slow it down but it’s believed that 675,000 people died in the U.S. alone. Ultimately it petered out after 15 months as people either died or developed immunity, but not before impacting some 500 million people around the world.

It baffled medical experts at the time, but almost 100 years later the influenza virus was identified as the H1N1 or avian virus, according to Business Insider.

The novel coronavirus, it should be noted, is not an influenza virus. Because of that, those who become infected have yet to develop immunity from previous exposure as has happened with the flu virus. That’s one of the things that makes it both unpredictable and deadly.