Customer throws woman, breaks her leg after being told to wear mask 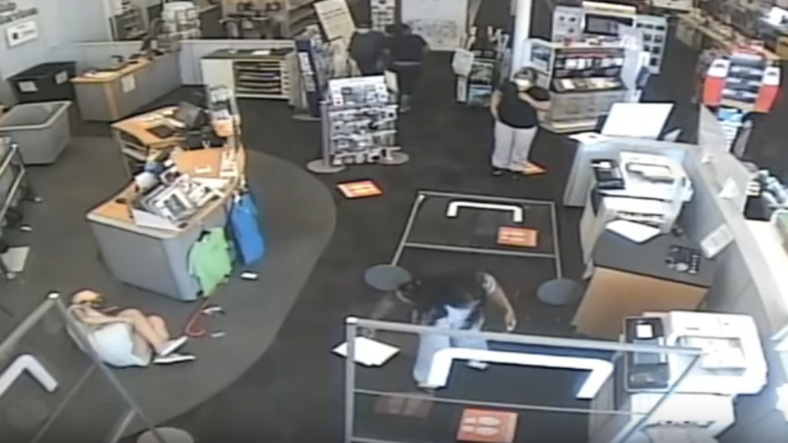 A woman was thrown to the ground in Staples in Hackensack, New Jersey after asking someone to wear a mask.

After the unexpected assault, Margot Kagan, who walks with a cane and recently had a liver transplant, was taken to the hospital to treat her injuries. She was diagnosed with a fractured left tibia.

According to Capt. Darrin DeWitt from the Hackensack Police Department, Kagan was using a copy machine at the store when a woman with a mask pulled down below her mouth approached a machine next to her.

Kagan asked the woman to put on her mask. It is unclear what the response was, but the two did exchange words.

The interaction between the two women led to a physical altercation. Their confrontation was recorded on Staples surveillance cameras and released by authorities.

In the video, a woman who is wearing a mask but has it pulled below her mouth, walks up to Kagan, ignoring the social distancing partitions. The two women engage in a heated conversation, with the unnamed Black woman approaching the 54-year-old white woman.

Kagan raises her cane and directs it toward the woman. That is where the incident escalates and gets violent. The customer first reaches for the cane and then tosses her to the ground.

“The suspect became angry and yelled at the victim, who picked up her walking cane and pointed it directly at the suspect, coming within inches of the suspect’s chest. The woman then yelled at Kagan, violently threw her to the ground, and left the store,” said detective DeWitt.

Kagan tells a local media outlet that she was asking the lady to be responsible and was disheartened by the exchange.

“The woman on one side of the plastic dividers had a mask, but here, below her mouth,” Kagan said from a hospital bed at HUMC.

She continued insisting that she only said, “You should really put a mask on.”

Almost $4,000 had been raised on a GoFundMe to help Kagan for her medical expenses.

This comes after Gov. Phil Murphy signed an executive order requiring people to wear masks when they unable to social distance.