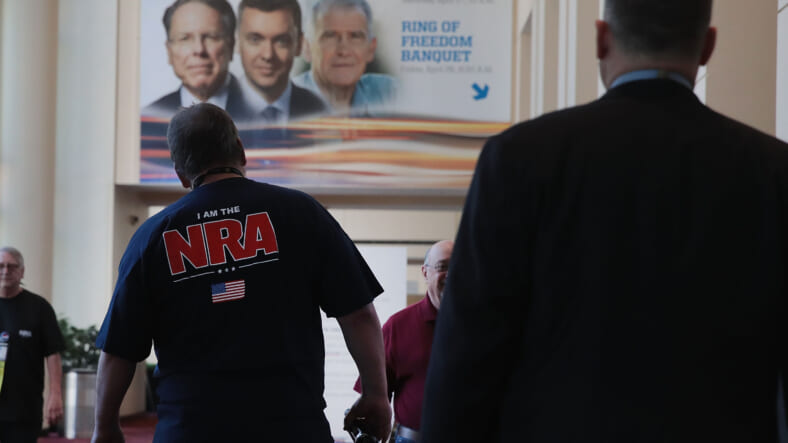 Guest walks under a poster featuring Wayne LaPierre (L), NRA vice president and CEO, Chris Cox (C), executive director of the NRA-ILA, and NRA president Oliver North outside a conference room where the NRA annual meeting of members was being held at the 148th NRA Annual Meetings & Exhibits on April 27, 2019 in Indianapolis, Indiana. (Photo by Scott Olson/Getty Images)

The possible dissolution of the National Rifle Association, the foremost champion of gun rights in the United States, is welcomed news to some members of the organization.

Many NRA members have complained about corruption at the top of the organization for years.

They allege that senior leaders of the NRA have wasted members’ money on luxury travel, personal gifts, family vacations, and big game hunts in Africa.

“This is the best thing to happen to NRA,” said Stephen Bozich, an NRA safety instructor and lifetime member. Like many NRA members, Bozich told Reuters he wants the NRA to remain intact but he hopes for new leadership.

Tim Harmsen, lifetime NRA member of host of the Military Channel Online told Reuters that he has been trying to expose the corruption within the NRA for years. Harmsen said the group is broken on the inside and needs new leadership.

He expressed that it seemed as though Wayne LaPierre, executive vice president of the NRA, had been deliberately trying to “run the organization into the ground.”

“Wayne has to go,” he concluded.

The lawsuit details how LaPierre squandered over $1 million of members’ money on private jet travel for his wife and family, even when he was not a passenger.

READ MORE: The NRA remains silent on the murder of Atatiana Jefferson

Later that same evening, the NRA filed a counter suit, claiming James was targeting the group for political reasons.

In a statement, James called the counter suit a distraction to hide “deep-rooted” fraud.

In a deposition, LaPierre justified the lavish expenditures as legitimate expenses. The NRA did not respond to a Reuters request for comment.