The NRA remains silent on the murder of Atatiana Jefferson

Despite legally owning her gun, the National Rifle Association has not commented on her rights as an owner 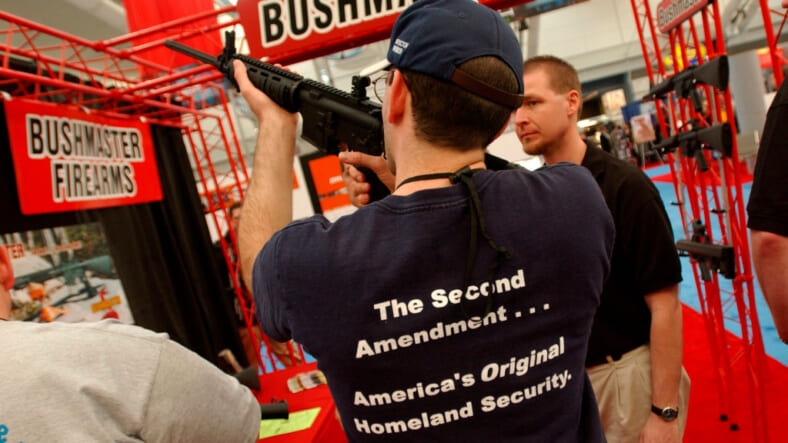 The National Rifle Association has been tight-lipped in its defense of Atatiana Jefferson, a Black woman who legally owned a gun she used to defend her family in their home when she was shot and killed by a white cop.

The NRA is notorious for speaking out in support of legal gun owners and were key players in getting the castle doctrine legislation passed Texas in 2007, which protects people who use deadly force to protect themselves while in their own home, according to The Associated Press.

According to Jefferson’s nephew, his aunt heard noises and grabbed her gun from her purse likely to assess if a prowler was outside. Jefferson was fatally shot and killed by former Fort Worth Texas police officer Aaron Dean, who fired a single shot through her bedroom window.

Jefferson, 28, who legally owned a gun, pointed her weapon “toward the window” and was shot and killed, the nephew said, according to the arrest warrant affidavit.

The nephew watched as his aunt fell to the ground. She was pronounced dead at 3:05 a.m. on Saturday. Police bodycam footage failed to show the officer barking out any commands to announce his presence.

The NRA has remained mum on the high-profile case and Jefferson’s actions as protected under the castle doctrine.

“And where is the NRA?” with Rep. Marc Veasey (D-Texas) tweeted Monday. “Once again they prove to the world that rigorous defense of [the Second Amendment] doesn’t extend to black America.”

The ofcr resigning is not good enough! @tarrantcountyda should file charges now and he should be behind bars! And where is the @NRA? Once again they prove to the world that rigorous defense of 2nd Amd doesn’t extend to black America. Justice4 #AtatianaJefferson https://t.co/fOIVgBDZeG

Jefferson’s home is in Veasey’s district.

Interim chief of Fort Worth police Ed Kraus believes it was the homeowners’ right and defends the decision that ultimately cost Jefferson her life.

“It’s only appropriate that Ms. Jefferson would have a gun,” Kraus said at a news conference Tuesday, the Dallas Morning News reported.

Kraus contends that it “makes sense” that Jefferson was armed.

“We’re homeowners in Texas,” Kraus said. “Most of us, if we thought we had somebody outside our house that shouldn’t be and we had access to a firearm, we would be acting very similarly to how she was acting.”

“It’s only appropriate that Ms. Jefferson would have a gun,” the family’s attorney Lee Merritt said at a news conference.

“When you think there’s someone prowling around in the back at 2 in the morning, you may need to arm yourself. That person could have a gun.”