The NBA star's voting-rights group, More Than a Vote, seeks to make voting both safe and accessible for this upcoming election

LeBron James‘ voting-rights group, More Than a Vote, has partnered with the Los Angeles Dodgers to make Dodger Stadium a polling place for the November presidential general election.

To combat voter suppression, the NBA baller founded More Than a Vote. The coalition’s partnership with the Dodgers is the first time a Major League Baseball team’s facility will be used as a voting center.

Read More: Everything you need to know about Kamala Harris, Biden’s VP pick 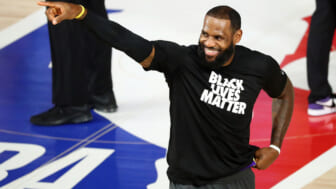 “The site will be accessible with free parking to any registered voter in Los Angeles County over a five-day period with operational details to be announced at a later date,” said the Dodgers in a statement published on Thursday, adding “the site will follow all CDC and Public Health guidelines regarding social distancing.”

California holds 55 electoral votes and according to LACounty.gov, Los Angeles County has the largest population of any county in the nation with over 10 million residents.

“Dodger Stadium is part of the fabric of Los Angeles, and we’re proud to continue to partner with the County to make the property available for the benefit of the community at large. Voting is all of our civic duty, and we’re excited to work with More Than a Vote to do anything we can to help get out the vote by making this process as easy, accessible, and safe for all Angelenos,” said Stan Kasten, Dodgers president, and CEO.

To take COVID-19 precautions, the Dodgers arena has been closed to the public for the first part of 2020. While closed, the stadium has been used to combat the coronavirus pandemic.

“I may still be new to LA but didn’t take long for me to learn how special the relationship is between the Dodgers and Lakers. We are all in this together. I’m really proud we were able to help the Dodgers become the first MLB stadium to open for voting,” said James.

“This is exactly why we created More Than a Vote. A lot of us now working together and here for every team who wants to follow the Dodgers lead and turn their stadium into a safer place for voting.”

More Than a Vote was organized in June of this year, following James’ 2018 docu-series, More Than An Athlete. A documentary that directly combats the stigma of athletes being only athletes. The film highlights Jame’s life off the court, showcasing how he continues to grow from an athlete to an athlete, activist, and more reported Medium.

California Secretary of State Alex Padilla said he hopes the partnership “inspires others to join us as we work to educate the public on changes to the November general election and to identify new voting locations and poll workers.”