Abdullah, a professor at Cal State University, was in the home with her three children when police arrived pointing guns 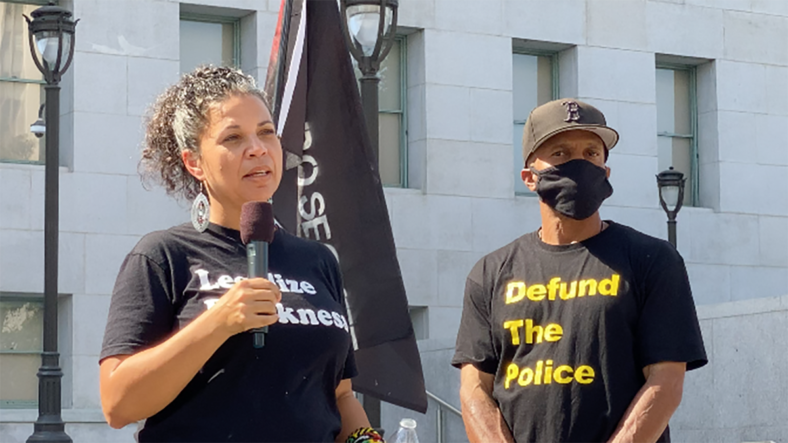 Dozens of police officers swarmed the home of Black Lives Matter organizer Melina Abdullah around 9:00 a.m Wednesday morning, demanding she come outside with her hands up.

The incident happened right before Abdullah was scheduled to speak at a press conference on Cal State University’s campus, in support of her being chosen as the Founding Dean of CSULA’s Ethnic Studies program.

In an Instagram live video Abdullah streamed of the incident, police are seen pointing guns in the direction of her home, yelling demands. Abdullah’s quick thinking kept police from entering the home where her three children were present — fearing their tactics would only escalate the situation.

In her live video, Abdullah tells her children the names of people she wanted them to call right away. A few moments later, you hear Abdullah weighing her options.

“I have to go outside,” she said swiftly after peering out her living room window a few more times.

“I’m coming out with my hands up. I have my phone in my hand,” Abdullah yelled to police while she was still live streaming.

As Abdullah walks away from her home and closer to the police, you can see a Black man enter the video frame with his arms in the air, telling police that Abdullah was his sister.

Another woman soon emerges on scene, saying that her nieces and nephews were inside Abdullah’s home.

“They pointed rifles directly into my windows. They posed a threat for at least half an hour, maybe more, and they could have easily stolen my life. But it wasn’t so easy for them because I believe I am divinely protected,” Abdullah said later that evening during a protest against Los Angeles District Attorney Jackie Lacey.

LA City Councilman Herb Wesson has called for an investigation for what is being called a “swatting” incident.

Police at the scene told Abdullah they received a call that people were being held hostage inside and someone was demanding a $1 million ransom.

After noting Abdullah was not in danger, police left and she headed to the press conference at CSULA, arriving only 10-15 minutes behind schedule.

In February, the university put out a call for an Ethnic Studies Founding Dean — a position many believe Abdullah should rightfully hold. For years she has worked as a professor on CSULA’s campus, even holding the position as chair of the Pan-African Studies program.

Abdullah has been a fierce advocate pushing for ethnic studies to be mandated by the state.

“That way, Black people and anyone who wants to stand with authentic ethnic studies can access those events, classes and spaces,” Abdullah continued.

Abdullah is a notable figure in the fight against police violence and murder. She has been a tireless advocate helping families who have lost loved ones at the hands of police violence in Los Angeles.

”We have to find ways to build community stronger than ever and protect ourselves. We have to protect each other,” said Insecure actor and activist Kendrick Sampson at the Lacey protest in DTLA, where theGrio was on the ground.

”It was the community who protected Melina against the police.”

“We are going to have to take unprecedented measures to achieve liberation,” Sampson continued. He has become a familiar staple at BLM protests and rallies in LA, working in conjunction with BLMLA through his social action group, BLD PWR.

Lacey has been heavily criticized for failing to prosecute or hold cops accountable for killing and harming the residents of L.A since being elected in 2012.

For more than two years now, BLMLA has been meeting every Wednesday outside City Hall in LA protesting Lacey.

BLMLA has also organized actions at Lacey’s home where her husband, David Allan Lacey, was seen on video in March pointing a gun at protestors on his front steps early morning. He was charged with three misdemeanors from the incident and is set to be arraigned in September.

BLMLA’s tenacity and demonstrations gained enough notoriety that former San Fransisco DA George Gascon put in his bid against Lacey who was running unopposed in the upcoming 2020 election.

In 2019 Abdullah saw 8 felony charges dropped by the city of L.A after community support and pressure. The charges stemmed from Abdullah’s May 2018 arrest at a Los Angeles Police Commission Meeting.

“I am grateful to the creator and the ancestors that surround and protect me and we are going to acknowledge them and praise them,” Abdullah said at the Lacey protest.