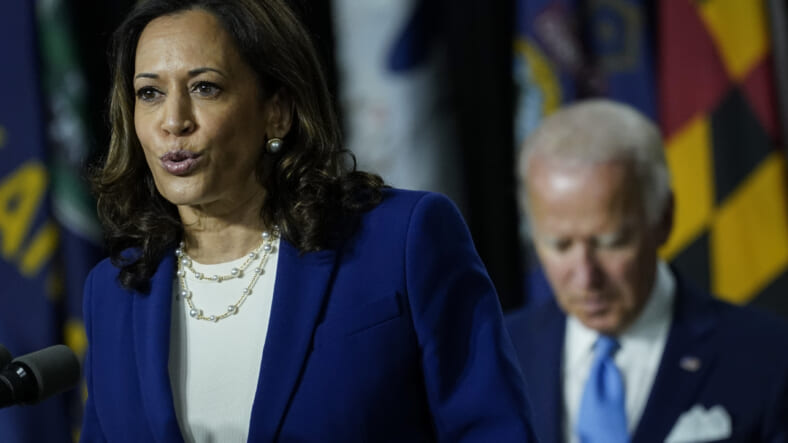 Amazon has removed shirts from its marketplace that referred to Democratic vice-presidential candidate Sen. Kamala Harris as a sexist slur.

The Oxygen Bandit was selling merchandise that ranged from T-shirts and hoodies with the phrasing “Joe and the Hoe,” and Biden’s campaign logo, USA Today reported Wednesday. Amazon took down the apparel which was being sold for $24.99 to $42.99.

“All sellers must follow our selling guidelines and those who do not will be subject to action including potential removal of their account. We are working to remove these products,” an Amazon spokesperson told USA TODAY.

theGrio also reached out to Amazon for comment and was provided with one.

“All sellers must follow our selling guidelines and those who do not will be subject to action including potential removal of their account. These products have been removed,” a spokesperson stated.

Other items sold by Oxygen Bandit included clothing with the words “Kamala smelled the best” an apparent knock against the newly minted Democratic nominee for president and, at the time of publication was still available for purchase.

The attacks against Harris ramped up after Biden selected her to be his running mate last week. Critics have used her past relationship with former San Francisco mayor Willie Brown against the former California attorney general.

The two were romantically involved in the mid-90s. During this time, Brown appointed her to the California Unemployment Insurance Appeals Board, and then to the Medical Assistance Commission.

Harris was elected in a runoff be San Francisco District Attorney in 2003 and distanced herself from Brown. She married entertainment lawyer Douglas Emhoff in 2014.

Read More: Kamala Harris has a message for voters who aren’t feeling her and Joe Biden

Conservative commentator Rush Limbaugh, who was awarded the Medal of Freedom in February by President Donald Trump, used his radio show to insult Harris. On Tuesday, he called the 55-year-old senator a “hoe” and a “mattress,” and labeled her relationship with Brown as an “affair.”

At the time of Brown’s relationship with Harris, he was separated from his wife Blanche Brown for more than a decade. Nonetheless, Limbaugh felt certain that Harris broke up the marriage for her own gain.

“And now we have something new that’s been thrust, ‘ahem,‘ into American politics, and that’s the question of using sex to get ahead,” he said. “I just find this really, really curious.”

Representatives for the Biden campaign have not responded to the derogatory T-shirts being put on sale or the comments made by Limbaugh. The campaign has been primarily focused on the virtual Democratic convention which is being held this week. Harris will formally accept the nomination to be Biden’s vice-presidential pick on Wednesday evening.

She recently told People about what kind of VP she hoped to be.

“We already have that understanding. I’m going to be the last one in the room — and there to give him honest feedback. Being vice president to Joe Biden to me means supporting his agenda and supporting him in every way,” she told the outlet.