'Donald Trump doesn’t want any of us to vote because he knows he can’t win fair-and-square.' 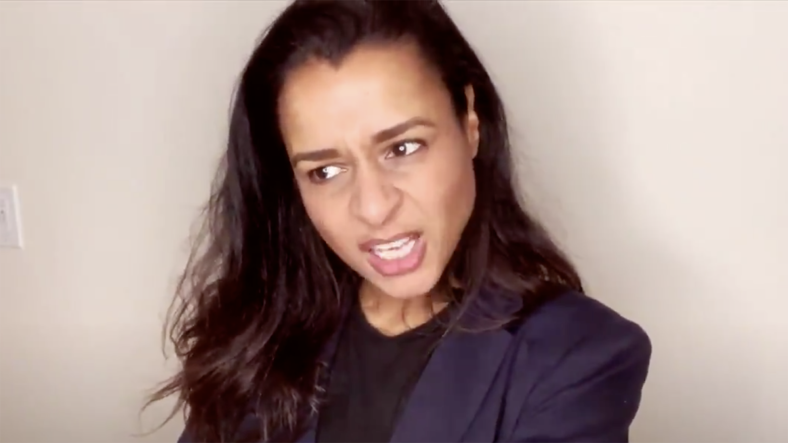 She’s become famous for her lip-sync character impressions of President Donald Trump. But, on Thursday during the final night of the Democratic National Convention, Sarah Cooper broke character to address the nation in her own voice.

In the signature blue suit that she wears during her act, Cooper impersonated Trump’s attacks on mail-in voting, in which he falsely claimed ballots would be counterfeited and stolen.

The camera then cut to Cooper sitting face-forward wearing a bright pink blouse. “Let me put this in my own words,” she said, “I’ve heard Donald Trump say some pretty unhinged things.”

“I’ve heard them over and over and over again,” Cooper said, alluding to the fact that in previous interviews she has said that she listens to clips of the president many times at a loud volume to perfect her delivery.

“Nothing is more dangerous than his attacks on mail-in voting during a pandemic,” the comedian said, adding, “Donald Trump doesn’t want any of us to vote because he knows he can’t win fair-and-square.”

“Whether you plan to vote by mail, or in-person, wearing your mask. It is your right. Don’t let Donald Trump take that away from you,” Cooper continued. She then provided the 30330 text number that Democrats are using to provide up-to-date voter information.

Cooper recently secured her own Netflix comedy special called Everything’s Fine, which is set to debut this fall.

The upcoming project will feature a “variety special full of vignettes dealing with issues of politics, race, gender, class and other light subjects,” read a Netflix press statement.

The special will be directed by Natasha Lyonne of Orange Is the New Black and executive produced by Saturday Night Live’s Maya Rudolph.

Cooper, 42, is also working on her second book.