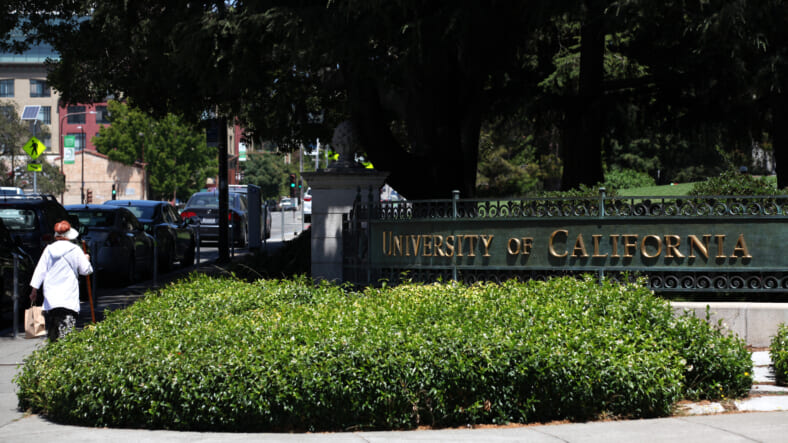 A pedestrian walks by a sign in front of the U.C. Berkeley campus on July 22, 2020 in Berkeley, California. (Photo by Justin Sullivan/Getty Images)

California’s longtime ban on affirmative action has brought challenges to Black and Latino communities at one of the world’s leading public university systems, according to research by the University of California Berkeley out Friday.

The new study concluded that the ban on preferential treatment, voted into law in 1996, negatively impacted Black and Latino students at University of California campuses by greatly reducing enrollment and graduation rates, along with future earnings power.

Asian-American and white students who did not gain admission to UC, on the other hand, were not negatively impacted by the affirmative action ban imposed by Proposition 209. It was found that those students had enrolled in universities of equal merit, which was reflected in their subsequent high earnings.

“This study presents several complementary pieces of evidence that suggest that the benefits provided by affirmative action to Black and Hispanic Californians prior to Prop. 209 substantially exceeded the costs faced by white and Asian Californians, and that those costs may have been quite small,” Zachary Bleemer, author of the study and a research associate at UC Berkeley’s Center for Studies in Higher Education, said.

With the Nov. 3 election approaching, California voters will consider another proposal on changing the rules again, the Los Angeles Times reports. The measure, Proposition 16, proposes a constitutional amendment to repeal the 24-year-old prohibition on affirmative action in public education and employment based on race, ethnicity or gender, the outlet said. It’s a change that overseers of the UC system support.

The UC Board of Regents in a June statement unanimously endorsed the repeal of Proposition 209, amplifying the widespread support within the university system to restore affirmative action.

Enrollment rates of underrepresented groups, defined as Black, Latino, Pacific Islander or American Indian students, dropped from 20% in 1995 to 15% in 1998, while the enrollment of Asian American and white students increased significantly, the statement read.

The Los Angeles Times reported that those in opposition of the repeal, including some Asian Americans, have expressed concern over the possibility of a return to “racial favoritism.”

Bleemer, however, disagreed, stating that Asian-American and white students were not significantly disadvantaged by affirmative action and did not particularly benefit from its repeal. He said that Proposition 209 set off the most massive reshuffling of college students in U.S. history as it upended the admissions process for hundreds of thousands of students in both UC and CSU systems.

“Suddenly all these universities stopped using this policy. It seemed like a great opportunity to understand what affirmative action was doing for thousands of students in California. And the answer looks pretty bleak for those students,” Bleemer said.