More than 100 protesters gathered near government buildings Sunday evening, before splitting into groups to march through uptown 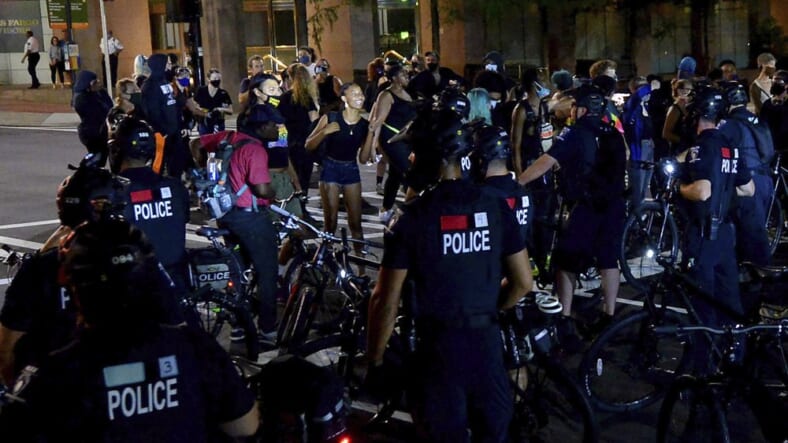 CHARLOTTE, N.C. (AP) — Police in Charlotte, North Carolina, made at least two more arrests and used pepper spray on demonstrators protesting the night before the Republican National Convention was set to begin and President Donald Trump was expected to land in the city.

More than 100 protesters gathered near government buildings Sunday evening, before splitting into groups to march through uptown, news outlets reported.

Later that night, about 80 demonstrators assembled near the Westin Charlotte Hotel where delegates were set to stay during the convention.

Just before midnight, police said demonstrators began to move barricades, construction cones and trash cans to block roads. While protesters were marching away from the area, they surrounded a pickup truck that was trying to pass through the crowd, The Charlotte Observer reported.

One demonstrator fell to the ground as police on bikes blocked their path and forced them back. Charlotte-Mecklenburg Police said in a tweet that officers were “assaulted” by demonstrators while trying to intervene.

While there were fewer arrests than the five that were reported during demonstrations on Saturday, the department said on Twitter on Sunday that officers arrested someone they recognized with outstanding felony warrants, and a demonstrator who “interfered with officers” making the first arrest.

GOP officials in Charlotte are expected to vote to renominate President Donald Trump in a small in-person session Monday.