Gov. Bill Lee quietly signs a bill that would make camping on state property a Class E felony. Felons have no right to vote in Tennessee 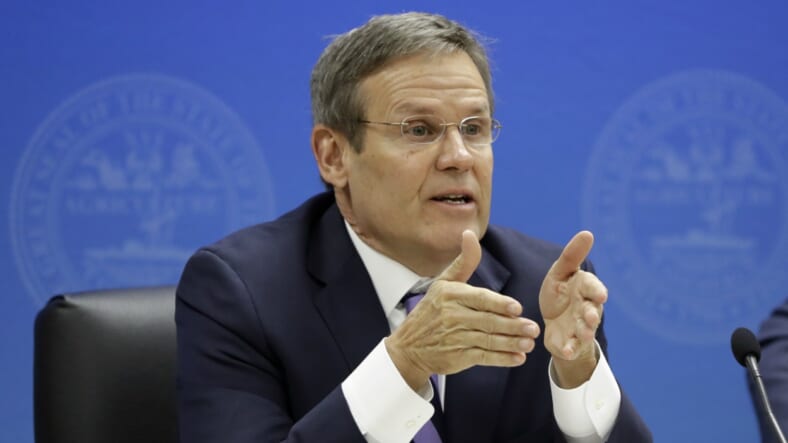 Tennessee Gov. Bill Lee quietly signed a bill into law Thursday that could result in some protesters losing the right to vote.

The new law increases penalties of illegal camping on state property, making protesters who do so be subject to a Class E felony, according to The Hill. The bill was pushed through the state legislature in a special three-day session last week and signed without announcement.

This means, if convicted, a protester can face up to six years imprisonment. The state of Tennessee, which has a dark history of voter suppression, does not allow convicted felons to vote.

“This bill increases the punishment for illegal camping on state property from a Class A misdemeanor to a Class E felony with a mandatory minimum sentence of 30 days imprisonment and an order of restitution for any property damage or loss incurred as a result of the offense,” the summary of HB 8005 reads.

“This bill generally prohibits the release of a person arrested for any of the following offenses for 12 hours from the time of the arrest: camping on state property, vandalism of government property, rioting, aggravated rioting, inciting a riot, or obstructing a highway.”

The measure comes after demonstrations have been carried out for months in front of the state capital building. The demonstrations are a part of nationwide unrest that followed the death of George Floyd at the hands of Minneapolis police in May.

In addition, the new law mandates a 45-day jail sentence to those guilty of aggravated riot, higher fines for blocking emergency vehicles on highways and Class C felony for assaults on first responders.

Passage of the new law, which did not receive publicity from the government, was first reported to the Associated Press by the leader of the American Civil Liberties Union of Tennessee (ACLU).

Hedy Weinberg, Executive Director of ACLU in Tennessee, made a statement about Lee’s action and expressed dismay about the new penalties.

“We are very disappointed in Governor Lee’s decision to sign this bill, which chills free speech, undermines criminal justice reform and fails to address the very issues of racial justice and police violence raised by the protesters who are being targeted,” Weinberg stated. “While the governor often speaks about sentencing reform, this bill contradicts those words and wastes valuable taxpayer funds to severely criminalize dissent.”