Cardi B on RNC speaker comparing her to Melania Trump: ‘Didn’t she use to sell that WAP?’ 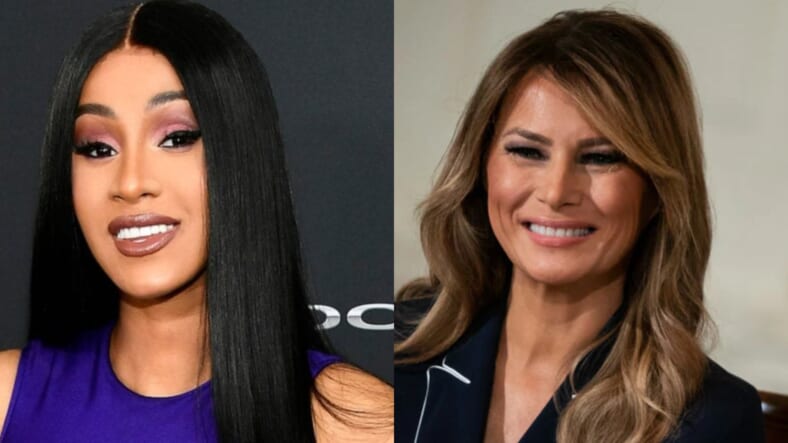 Cardi B is not one to mince her words and didn’t hold back after it was suggested the US needed more women like First Lady Melania Trump rather than those molded in the rapper’s image.

Read More: Tiffany Trump: ‘As a recent graduate, I can relate to so many of you looking for a job’

Trump was the keynote speaker during the second night of the Republican National Convention on Tuesday. It prompted DeAnna Lorraine, a former Republican candidate for Congress, to take swipes at former FLOTUS Michelle Obama and the Grammy-winning rap star.

“It’s so great to have a First Lady who doesn’t have the shoulders of an NFL linebacker,” she wrote on the social media platform.

Obama did not respond but Cardi, 27, had plenty to say, invoking her explicit record-breaking single “WAP” featuring Megan Thee Stallion.

“Didn’t she used to sell that Wap?” Cardi posted in response.

Cardi followed up her tweet with a nude image of Trump, 50. The current first lady, a former model, took frontal nudes during her career.

Since the release of “WAP” earlier this month, Cardi has become a frequent target of conservatives who take issue with the sexual nature of the song. Cardi and Megan consider the sexy anthem one of female empowerment while critics have branded it vulgar.

“The people that the song bothers are usually conservatives or really religious, fake religious people,” the rapper said recently to the “Kyle & Jackie O” radio show.

Trump has long denied any insinuation that she used to be an escort and sued over the allegation.

According to the BBC, in 2016, she filed a $150M libel suit against The Daily Mail after they published an article claiming that she accompanied men to events for money. The Daily Mail also accused Trump of “staging” when she met her husband, alleging that she’d known him already through her escort work.

The article was retracted and the case settled a year later for $2.9M. The outlet apologized to Trump as well, the BBC reported.

The White House has not yet responded to the comments about Trump but has instead been promoting her appearance at the RNC. She talked about the coronavirus and the current civil unrest in the country, extending her sympathy to both plights.

“My prayers are with those who are ill or suffering,” she said. “I know many people are anxious and some feel helpless. I want you to know you are not alone.”