In a state besieged by wildfires and COVID-19, the proposed police bills initiated after George Floyd's killing have yet to be debated on its House floor or publicly. 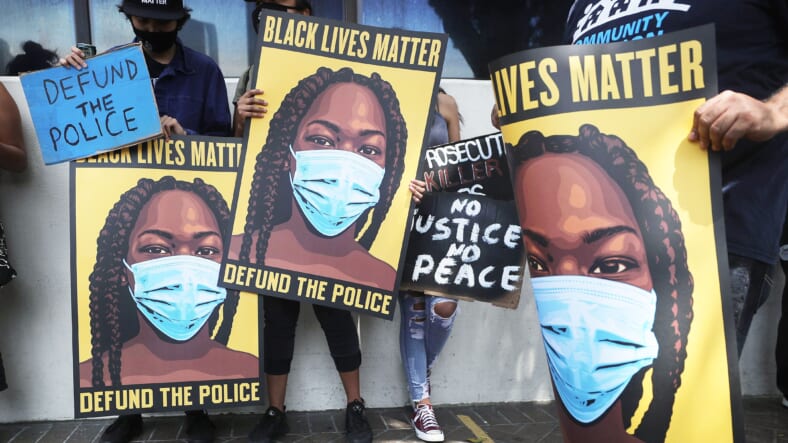 Black Lives Matter-Los Angeles supporters protest outside the Unified School District headquarters calling on the board of education to defund school police on June 23, 2020 in Los Angeles, California. The demonstrators want the funds currently spent on campus police to be reallocated to other student-serving priorities. (Photo by Mario Tama/Getty Images)

The state legislature of California has stalled on several police reform bills initiated after May’s police killing of George Floyd.

The measures include a proposed law to require fellow officers to intervene if they witness excessive force, as well as a plan to overhaul the oversight boards of California sheriff’s departments.

“Many times, you have folks in our world, elected officials, who are there for the photo-op, the press conference, but it when it comes to standing up and doing the real thing, they fade to the shadows,” State Sen. Steven Bradford told The Los Angeles Times.

Bradford is the author of the most controversial remaining measure, which would strip bad officers of their badges. “They run from the police when it comes to standing up to them,” he said. “This is what has these folks in fear, the threat of the union coming after them.”

State legislators are still considering bills that would expand the release of police records and place restrictions on rubber bullets and tear gas during protests.

Further, legislation banning the use of chokeholds and carotid restraints is still pending.

Lawmakers have until Monday night to vote on remaining bills, and Gov. Gavin Newsom must sign those sent to him by the end of September.

Yet, in a state besieged by wildfires and coronavirus, these bills have yet to be debated on the California House floor, nor have their been public debates on them. One union leader believes the bills aren’t moving because conversations discussing them aren’t possible at the moment.

Brian Marvel, who heads the Peace Officers Research Association of California, told The Times, “I know that on the one hand, we’ve had a little bit of success here on the back end of 2020, but we know we have a lot of work coming in 2021.”