Police officers escorted Sen. Rand Paul and his wife back to their hotel 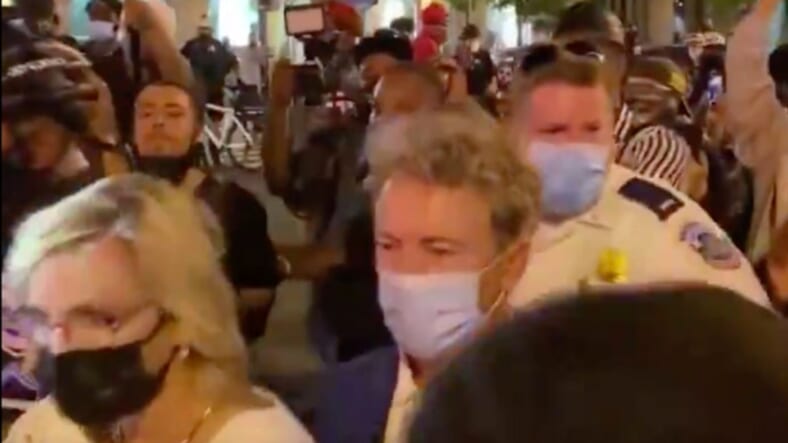 Kentucky Senator Rand Paul (R-KY) and his wife were confronted by protesters as they attempted to leave the White House following President Donald Trump‘s RNC speech.

According to Newsweek, on the fourth night of the Republican National Convention, protesters held demonstrations outside the White House as Trump officially accepted the nomination to run for president for a second time.

While the confrontation between the lawmaker and the protesters was tense, Paul alleged they were yelling death threats at him and his wife, Kelley, that made him literally fear for his life.

But footage of the incident shows that he was flanked by police officers who not only kept him safe but also reportedly escorted him back to his hotel.

READ MORE: Paul George says he was in ‘dark place’ with ‘anxiety, depression’ in NBA bubble

“They would have killed us had the police not been there,” the conservative opined to Fox News. “The threats were to f— you up, to you know, to kill you. The threats were if they could get ahold of you, and I truly believe with every fiber of my being, had they gotten at us, they would have gotten us to the ground.”

Paul claimed he and his wife may have been killed.

“We might just have been injured by being kicked in the head or kicked in the stomach until we were senseless. You’ve seen the pictures. Most of the networks will not show the pictures of this. This is happening in all of our cities. Its got to stop and thank God for the police,” he said.

“Had we not gotten to the police, I truly believe that the police saved our lives, and we would not be here today, or we’d be in a hospital today had the police not been there,” he concluded.