The revolutionary life of Fred Hampton

'You can kill a revolutionary, but you can never kill the revolution.' -Fred Hampton 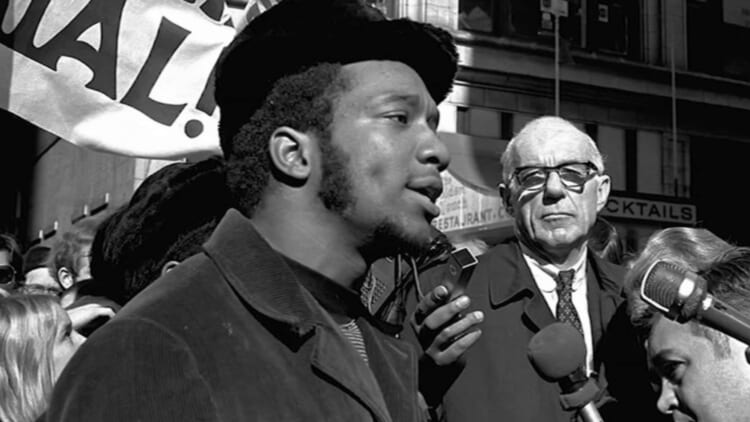 Fred Hampton, chairman of the Illinois Black Panther party, at a rally outside the U.S. Courthouse October 29, 1969. (via AP)

As the world mourns the tragic passing of legendary actor Chadwick Boseman, known for his stirring depictions of iconic Black figures such as Jackie Robinson, James Brown, Thurgood Marshall, and the fictional MCU superhero Black Panther, we celebrate the birth of another revolutionary icon and real life Black Panther, Fred Hampton.

Hampton’s vastly impactful work as leader of the Chicago chapter of the Black Panther Party, landed him on the FBI COINTELPRO list of “threats” to be “neutralized.”

Early in the morning of December 4, 1969, under the orders of State’s Attorney Edward Hanrahan, and with the help of FBI informant and Panther security guard William O’Neal, Chicago police brutally assassinated 21-year-old Hampton as he lay asleep in his bed next to his pregnant fiancé. Today would have been Hampton’s 72nd birthday.

READ MORE: Why the assassination of Fred Hampton matters today

According to leaked FBI documents, the government had a plan in place to deal with any emerging Black leaders “who could unify and electrify the masses.”

“Why do they want to get rid of me? Because I am saying something that might wake up some other exploited people and some other oppressed people. And if all these people ever get together, then these [people] that are exploiting us, we’ll be able to run them into the lake,” said Hampton.

The egregious murders of Hampton and fellow Panther defense captain Mark Clark, and the subsequent police cover up, have been the subject of countless articles and documentaries over the last 5 decades. But today, we celebrate the life of a self-proclaimed revolutionary for the people.

Hampton saw the world not as Black vs. white, but oppressor vs. the oppressed, and he sought to unite poor and working-class people of all racial and ethnic backgrounds in order to revolutionize and overthrow the regressive capitalistic American government.

In a 1968 speech, he said “When they brought slaves over here, it was to make money. So first the idea came that we want to make money, then the slaves came in order to make that money. That means, through historical fact, that racism had to come from capitalism.”

His uncanny ability to see the bigger picture and unite peoples of all backgrounds is a skill he’d had from a very young age.

Born on August 30, 1948, and raised in Maywood, a small mostly Black working-class suburb of Chicago, Hampton was a brilliant scholar and athlete with aspirations of one day playing for the New York Yankees.

In elementary school, Hampton served as the captain of the patrol boys, who helped control traffic so students could safely cross the streets. In middle school, he led morning homework sessions that were attended by both his Black and white peers.

In high school, he was appointed leader of the Youth Council of the NAACP’s West Suburban branch after the organization saw just how prolific his organizing capabilities were. He managed to enlist over 700 new youth members.

During his last two years at Proviso East High School, “racial trouble” had begun to break out as the community was becoming more racially diverse. High school students from nearby white neighborhoods hurled racist insults and attacks at Black students from Maywood.

A natural leader, Hampton joined his school’s Inter-racial Cross Section Committee and was able to cool the tensions and unite the Black students and white students against one common enemy: the school system.

Threatened by the power of these working-class Black and white students and the demands that they had laid out to end the school’s racist practices, school administrators began to bring in police, ultimately leading to one of his peers, Eugene Moore, being unjustly arrested. Hampton led a march to the Maywood police station to protest and demand Moore’s release.

In 1967, Hampton and the Youth Council petitioned to have a non-segregated pool built in Maywood. But when police were called to quell the peaceful demonstrations, Hampton and 17 other young people were brutally beaten and charged with mob action and disorderly conduct.

This 1967 arrest gave Hampton a more militarized outlook on policing and the capitalist system. Rather than pursue his baseball dreams, he enrolled in Triton Junior college to study law in an effort to aid Black people in learning to defend themselves in the face of police brutality.

In the summer of 1968, Hampton formed a Maywood chapter of SNCC (the Student Non-Violent Coordinating Committee), and then in November of that same year, he, Bobby Rush, and about ten others formed the Illinois Chapter of the Black Panther Party.

Hampton also spearheaded various socialist programs such as the free breakfast program for children and the people’s medical clinic.

He believed that educating the community was key because “with no education you have neocolonialism instead of colonialism…if [the people] don’t have education, then they’re nowhere because they don’t even know why they’re doing what they’re doing. You might get caught up in the emotionalist movement. You might get caught up in being poor, and then want something. And then if they’re not educated, they want more and before you know it, they’ll be capitalist, and before you know it, we’d have Negro imperialists.”

Hampton not only united students and poor members of the community, but he also convinced the local gang organizations to put aside their differences and forge a unity that has since become national in scope known as the “Rainbow Coalition.”

In just 21 years, Fred Hampton had accomplished so much for the people and left a lasting legacy that the FBI failed to extinguish with his murder. Police routinely surveilled and followed him even prior to his involvement with the Black Panther Party, and he was acutely aware that his life could be cut short at any moment. But to those who wondered how he could press on in the face of death, he had this to say:

“If you ever think about me…and if you ain’t gonna do no revolutionary act, forget about me. I don’t want myself on your mind if you’re not going to work for the people. Like [the Black Panther Party] always said ‘if you’re asked to make a commitment at the age of 20, and you say ‘I don’t want to make a commitment,’ only because of the simple reason that ‘I’m too young to die, I want to live a little bit longer’…you’re dead already.”

In a time when Black death is in almost every headline – from COVID-19 to police shootings, to the recent revelation that Chadwick Boseman acted in and produced films that uplifted the Black community all while silently battling terminal colon cancer – we are all coming to terms with our own sense of mortality and what it means to leave a legacy.

Today, on what would have been his 72nd birthday, we honor the legacy of Fred Hampton, a young man, who made a commitment to be a revolutionary for the people. A new generation will get to experience his message of unity and reclaiming power for the people in Judas and the Black Messiah (starring Boseman’s Black Panther co-star Daniel Kaluuya).