Colin Kaepernick is returning to Madden 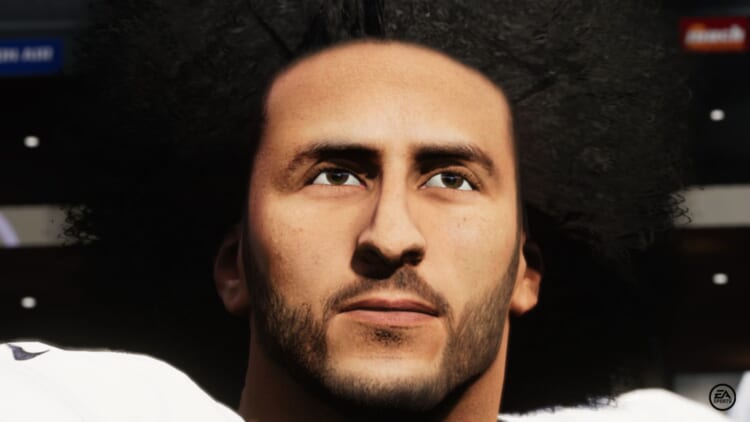 Colin Kaepernick’s likeness is back in Madden (EA Sports)
Loading the player...

Colin Kaepernick is back on the football field like he never left—the virtual field that is. The former San Francisco 49ers player will make his return to Madden after being absent from the game for over five years.

Kaepernick is known for using his platform to take a stand against injustice. In 2016, he refused to stand for “The Star-Spangled Banner,” in protest of systematic racism and police brutality. But since his very public stance, the player has not been signed to a major NFL team. The Grio reported back in May that an NFL executive confirmed Kaepernick has not been picked up due to his activism.

Initially, when Kaepernick became a free agent he was no longer included in the group licensing agreement, so EA Sports could not use his likeness. But now Kaepernick is back and EA Sports says fans can look forward to seeing the player as soon as Thursday.

According to The Undefeated, EA Sports released a statement saying, “Colin Kaepernick is one of the top free agents in football and a starting-caliber quarterback. The team at EA SPORTS, along with millions of Madden NFL fans, want to see him back in our game.”

Kaepernick played a very big role in what his Madden avatar will look like. The player requested his likeness include his illustrious afro, an update from his past avatar which featured cornrows braided to the back.

“Knowing that our EA SPORTS experiences are platforms for players to create, we want to make Madden NFL a place that reflects Colin’s position and talent, rates him as a starting QB, and empowers our fans to express their hopes for the future of football. We’ve worked with Colin to make this possible, and we’re excited to bring it to all of you today.”