OPINION: The Democratic presidential nominee can come up short on Nov. 3. But probably not for the reasons you think. 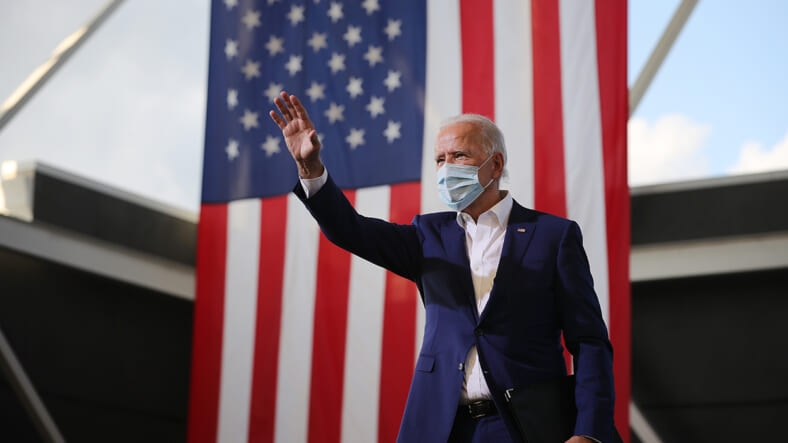 Wearing a face mask to reduce the risk posed by the coronavirus, Democratic presidential nominee Joe Biden waves to supporters during a drive-in voter mobilization event at Miramar Regional Park October 13, 2020 in Miramar, Florida. With three weeks until Election Day, Biden is campaigning in Florida. (Photo by Chip Somodevilla/Getty Images)

A few nights ago I got the following call from a friend and it went a little something like this:

“Hey Jason, I think Joe Biden’s going to win the election in a HUGE blowout. But my wife is still worried about what’s going to happen. She trusts your opinion on this kind of stuff, so Imma put you on speaker, what do you think?”

My parents, their friends, their friend’s friends, neighbors and random Facebook friends routinely call me in a panic wondering if Joe Biden will lose, or will Trump cheat and win, or can “we” (meaning the collective of Americans who care about Democracy) take back the Senate in November.

In the interest of time and space, for anyone else in America religiously checking every poll fluctuation and commercial and news report for clues about the next two weeks, I’ll save you the trouble:

Yes, Joe Biden can still lose the 2020 Election. But probably not for the reasons you think.

I am not creating chaos for clicks or being unnecessarily cynical about the upcoming election. I’m saying that there are such disparate numbers coming out of polling, anecdotes from elected officials and national trends that you can’t discount Biden losing and it wouldn’t necessarily require ‘cheating’ on Trump’s behalf as so many people think now.

The national polls have been pretty stable all summer. Joe Biden has anywhere from a 7 to 12-point lead and that has not changed with COVID-19, Black Lives Matter protests or Trump shouting “Bring ’em out bring ’em out” to White nationalists during a presidential debate.

Read More: White women in this state regret voting for Trump: ‘I got it wrong’

Assuming Joe Biden holds all of the states that Hillary Clinton won in 2016, and his 5 to 7-point leads in Michigan, Wisconsin and Pennsylvania hold, he should have a clear path to an electoral college victory. Over 52% of registered voters who skipped out on the 2016 election say they’re voting in 2020 and voting for Biden.

More specifically we’re seeing large numbers of first-time voters and 2016 “skippers” turning out to early vote in Texas, Pennsylvania and North Carolina. Mind you that aforementioned paragraph is just about the numbers. When it comes to reading tea leaves there are also good signs for Joe Biden.

Sen. Ben Sasse (R-NE) who’s in about one of the safest of Republican seats took shots at Trump in a ‘leaked’ audio from a fundraiser. Followed by Sen. John Cornyn (R-TX) doing the Texas two-step away from Trump as well. When Republicans are distancing themselves from Trump, that means their internal polls are showing the president heading for a big “L.”

Given all of these trends and evidence, why am I saying that Joe Biden could still lose the 2020 election? The answer is fairly simple.

Read More: President Trump could find ways to get around a Biden win in the election

The law is on Trump’s side. Election laws in America are so vague, so open to interpretation and so inconsistently enforced that Donald Trump, along with his allies in State Houses and the over 200 judges that he’s placed in his first term, might be able to beat Joe Biden. Pennsylvania, which is crucial to a Joe Biden victory, is a perfect example.

Yesterday, the United States Supreme Court ruled that PA election officials could count mail-in ballots that arrive as late as the Friday after the election (Nov. 6). A huge voting rights victory that is only possible because the court is at a 4-4 tie right now. However, the Pennsylvania Supreme Court ruled just a few weeks ago that any “naked” mail-in ballots that lacked a special, secondary ‘secret’ envelope can be rejected at local election offices.

Given that this is the first year of mail-in balloting in Pennsylvania, mistakes will be made and officials estimate over 100,000 ballots could be invalidated. Trump’s Pennsylvania margin of victory in 2016? 44,000. In North Carolina about 40% of all mail-in ballots being rejected for minor reasons like misspellings or signatures not ‘matching’ what the local board of elections has on file belong to African American voters.

Over half a million mail-in ballots were rejected for these vote suppressing reasons during the Democratic primaries this spring and that was before COVID-19. Now that even more people are voting by mail the opportunity for Republican voter suppression is even higher.

In Wisconsin, plans to use the Bucks basketball arena and the Brewers baseball field for safe voting amid COVID-19 had to be scrapped for fear that Republicans would challenge the validity of the venues. In practical terms, it means Republicans could have sued to have every vote cast in the arenas invalided because of where the vote was cast, regardless of the voter intent.

This presages the GOP’s post-election strategy which will be to wipe out hundreds of thousands of votes just based on where they were cast before they can even be counted.

These are just three state examples, but remember there are still GOP shenanigans happening at the Post Office to slow down voting by first class mail, and outright theft as some Republicans have been caught placing fake mail drop-boxes which could cause who knows what kind of damage across crucial states.

While some local courts may uphold American voting rights, if any of these cases run into the almost 200 judges that Donald Trump has placed in office or the Supreme Court once Sen. Mitch McConnell has officially given Amy Comey Barrett her stolen seat, they will always rule against Biden.

Now I’m sure many people reading this article right now are filled with dread, but please understand I’m not making a prediction or a prescription here, just laying out the scenarios. The fact that Joe Biden could lose is not the same thing as saying he will, or that the race is even a toss-up.

Several things have to go right for Donald Trump to win, like voter complacency (unlikely) or a massive 20% Election Day voting gap between Republicans and Democrats (also unlikely). So what does that mean for you? I’ll tell you the same thing I say to everyone who calls me in a panic.

Get out and vote.

Call your local election office. Double-check your ballot status. Offer to drop off friend’s ballots instead of trusting the mail. Do everything you can locally. Nobody is out there thinking Joe Biden has it in the bag. However, to secure whatever bag he’s got we have to make sure it’s overflowing with enough votes that it’s too heavy for Republicans to steal.