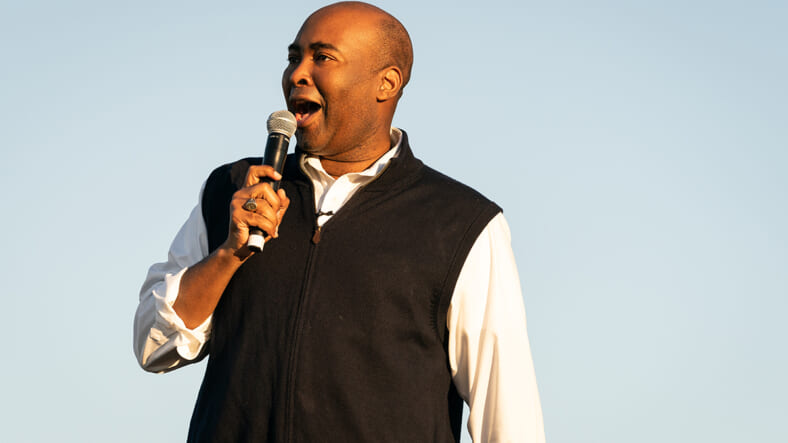 Jaime Harrison is on a mission to unseat longstanding U.S. Sen. Lindsey Graham in South Carolina in the upcoming 2020 election, and with tens of millions of dollars raised and enthusiasm around his campaign, he just might be able to do it.

Of course, this is no easy feat by any measure. Harrison, who is a Black man running as a Democrat to beat an incumbent Republican in a traditionally red state, understands the political and historical nature of his campaign.

If elected, Harrison would become the first Black Democrat to serve as a U.S. senator from the Palmetto State and only the second Black senator in the southern state’s long, storied history.

Following in the footsteps of other Black history-making politicians like former President Barack Obama and vice presidential nominee Kamala Harris, Harrison would also become only the 11th African American to win a U.S. Senate seat.

But Harrison says winning Graham’s seat goes beyond the superlative “first” or being on the shortlist of Black political success stories. He’s also weighing the racist lineage of politicians who came before him and served in the very seat he hopes to claim on Nov. 3.

“This was a seat of John C. Calhoun. This was the seat of Strom Thurmond,” Harrison tells theGrio during a recent exclusive interview.

“This was the seat of a man called Ben Pitchfork Tillman, a man who was governor of South Carolina. He changed the Constitution because he didn’t want a Black person to ever be governor. But he was also a senator and he would go to the floor of the U.S. Senate and talk about the joys of lynching of Black folks.”

What’s more, Harrison acknowledged that, if elected, he and current Republican Senator Tim Scott, would also make history as the first state to have two Black senators serving at the same time.

“It really is about closing the book on the Old South and writing a brand new book called The New South,” said Harrison. “And I think it will send a signal not only to South Carolina but to the region, but all across the country that we are making progress, that we are moving forward. And we’re doing it together. So I think it will be tremendous and I hope and pray that it happens.”

The 44-year-old candidate’s journey to politics is a classic story of the American Dream — particularly growing up Black and poor in America’s post-Jim Crow South. Born to a teenage mom in Orangeburg, South Carolina, Harrison says he was raised by his grandparents who had only a fourth and eighth-grade education.

Harrison was able to channel those values into an impressive rise to attend Yale University and Georgetown Law School and eventually working as an aide for longtime U.S. Congressman Jim Clyburn, who now serves as House Majority Whip. He also served as the first African-American executive director of the House Democratic Caucus.

Harrison also briefly worked as a social studies teacher to ninth graders in South Carolina and worked for a non-profit helping to improve the college and career pipeline for low-income youth. As a senator representing the entire state, he hopes to create more pathways for other young people to live out their own version of the American Dream.

South Carolina’s history of slavery and segregation is not lost on Harrison, in fact, he hopes his potential election win serves as an opportunity to begin building new bridges in the South — one that is inclusive for all.

His opponent Lindsey Graham recently caused shock waves when he appeared to suggest that Black people were only welcomed in South Carolina if they’re conservative.

“I care about everybody. If you’re a young African American, an immigrant, you can go anywhere in this state. You just need to be conservative, not liberal,” Graham said during a forum that was supposed to be his second debate against Harrison but was canceled after Graham declined to test for COVID-19.

Harrison says Graham’s comment only further illustrates why it’s time for a new senator in town.

“Lindsey Graham is a relic of an old south. And I’m talking about building a new South, one that is bold, that’s inclusive, that’s diverse,” Harrison said.

Harrison said he wants his election to be a turning point for the South, in which racism is a thing of the past. “We can’t be silent in the face of bigotry, in the face of hatred and division. It’s important that all of us stand up and say enough is enough,” said Harrison.