The media mogul is joined by April Ryan, Dr. Jason Johnson, Dr. Christina M. Greer, Jody Amour and David A. Love for the final installment of 'Vote For Your Life' 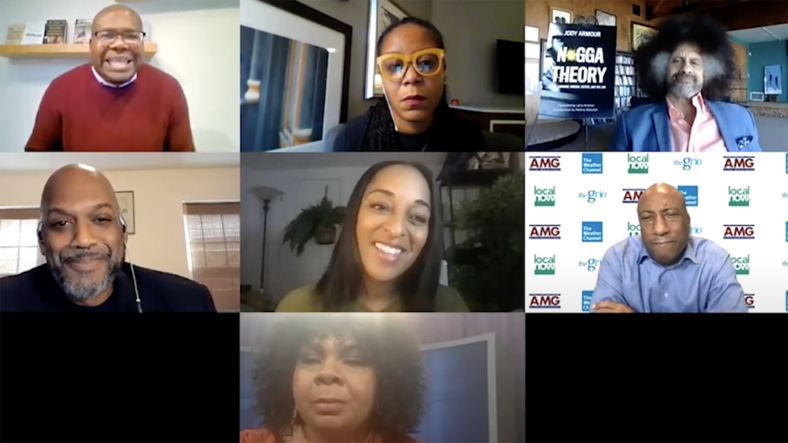 With Nov. 3 imminent, theGrio’s weekly online town hall Vote For Your Life reached its climax only two days before Election Day. For its final installment, host and theGrio’s VP of Digital Content Natasha Alford is joined by what she dubbed “the dream team” panel.

Although Election Day is finally upon us, some members of the panel have voted early, including Dr. Johnson, who feels if President Donald Trump isn’t removed, “all our freedoms are basically at risk.”

Just as with past panelists, like Tiffany Haddish and Marc Lamont Hill, Dr. Johnson talked about how the importance of other offices and how another four years of a Trump administration could impact local government.

“I like picking my leaders. I personally like having an impact on who is on the school board, what kind of judges will be giving me tickets, and which people will be determining whether or not my roads will be nice or bad,” Dr. Johnson stated. “I will lose that ability, all of us will lose that ability if Donald Trump is not removed from office.”

Dr. Greer also not only voted early for this election but said she votes “early and often, Chicago style” for all election cycles. So, she will be using Nov. 3 as some time for herself to observe the importance of and the sacrifices made for her to exercise her right to vote.

“I try to use it as a solemn day and as a day to treat myself and reflect on the hundreds and thousands of Black people who were murdered or lynched trying to get to do this thing that I get to do, even though I had to wait in line for two and a half hours,” Dr. Greer said. “I think of all the women who were raped trying to get the franchise to vote.”

Allen echoed Dr. Greer’s sentiment that voting is the least the Black community could do. Throughout each of the past six episodes of Vote For Your Life, the Entertainment Studios CEO spoke candidly about the obligation of Black American’s not only to vote but to “lean in” and donate to candidates that best serve the interests of their communities.

In this installment, Allen was unfiltered with his displeasure for those who don’t exercise their right to vote. “To me, that’s just shenanigan talk,” Allen stated. “That’s just foolishness. ‘Are you going to vote? Did you vote? How come you didn’t vote? I’m voting for the first time.'”

He continued, “As Christina said, when you think about our ancestors who died for our right to vote, it’s just inconceivable, it’s just wrong to even have that thought that ‘I’m not going to vote.'”

The panel discussed how voting is only the beginning of the process of improving life for Black Americans. Dr. Johnson used an analogy that summed up the steps that need to be taken to foster progress.

“Saying ‘go out and vote’ is kind of like saying to a person who wants to lose weight, ‘just eat better.’ You aint’ going to lose weight just by eating better. You also have to exercise, and sleep well, drink water and stop hanging out with your friends that eat lousy food.”

“Voting is the same thing. Voting is the minimal thing that you can do. You also give money. You also attend community meetings. You go to school board, you got to city council, you protest from time to time, you write letters.”

There was much talk about how many Black Americans feel unmoved about having to choose between Trump or Democratic candidate Joe Biden. Amour spoke of his own experience of fielding such ambivalence from young activists in California who believe voting for Biden and Kamala Harris won’t change much.

“Many of them who are marching for criminal justice are alarmed by the idea of having one the architects of mass incarceration, Joe Biden, at the top of the ticket and saying ‘that disheartens me,” Amour said. “Having a former DA and AG at the top of the ticket (Kamala Harris), that was disheartening to them. I had to bring home to them and why I went to the ballot was, even though you feel that way — I’m not going to knock anyone who feels that way, because there’s some basis for it — down-ballot is crucial.”

READ MORE: Maxine Waters on Black Trump voters: ‘I will never forgive them’

Allen gave his predictions for the presidential race, but the results were a double edged sword.

“We have, what I believe, is good news and bad news. The good news is I think Biden and Harris are going to win by a landslide,” Allen stated.

April Ryan, who’s been on all but one episode, stated that one of the reasons Black Americans get so disillusioned with voting is because they aren’t provided education for how politics work and affect them in schools. She says that basic civics classes would empower Black youth and get them prepared to be a part of the process, and the importance of donating.

“We were never really taught collectively that, yes, you donate, the politicians will pay attention to you,” Ryan said. “We’ve always left it to other groups. Now, we understand, because people did not want to bring us to the table to learn so that we could own the table.”

David Love recognizes that the tactics of taking away the Black vote goes far beyond education. He concedes that this election is different and the stakes are higher than ever.

“Every four years, they tell you, ‘This is the most important election of all time,’ and this time it’s actually true. I really look at this election as the white man’s last stand, and I’m not saying that lightly,” Love said.