OPINION: Black voters came to slay at the polls and Biden's win is also a victory for us.

Violetta Smith celebrates the news that Democratic presidential nominee Joe Biden has seemingly won the election while waiting at the Chase Center where Mr. Biden is expected to make an announcement on November 07, 2020 in Wilmington, Delaware. Votes are still being counted in his race against incumbent U.S. President Donald Trump. (Photo by Joe Raedle/Getty Images)

It appears that a few short days can make a huge difference. On Tuesday night, I was yelling at the projections that showed then-Democratic candidate Joe Biden in a tight race against President Donald Trump. Like many Black voters, I was sitting there like “How Sway?”

But it appears that anyone who wasn’t Black was pretty much here for another season. The spirit of our ancestors drove us to the polls and made sure we put a stop to it.

On Saturday, as Biden began to turn previous red battleground states, such as Wisconsin and Michigan, blue thanks to the support of Black voters in major cities — he finally clinched the victory thanks to Pennsylvania. Black voters in Philly, Detroit, and Milwaukee came through in the clutch to send Trump packing and put Joe Biden and Kamala Harris in the White House.

Honestly, I’m glad to finally be able to tell Trump “you’re fired.” Seriously, it was the racism for me.

From the moment he decided to announce his bid for president and call Mexicans rapists, it was a wrap. Let’s not even begin to start with the birtherism a few years prior with President Barack Obama or the time he dropped stacks on a front-page ad in the New York Times trying to get The Exonerated Five the death penalty — Trump was always a problem for Black people. I’m glad to finally say we defeated him.

Some might say “now is the time to unite the country and not be petty,” but these are the same folks who must not know that Black people can chew gum and walk at the same time. We dragged Biden when he was constantly making gaffes in the Black community, but we weren’t too foolish enough to not show up to the polls and get the Bigot-in-Chief out of office. Black people went through a lot over the last four years that felt like the Twilight Zone. After eight years of Obama, we really felt the difference. 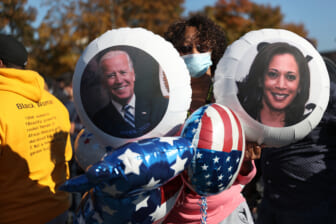 Things were never perfect before, but Trump wasn’t it at all. We went from change to strange real quick and lost a lot along the way. Neo-Nazis felt bold enough to go out in public again, with cocky Karens trying to ruin our lives. Our daily lives were never the same as we got distracted with Trump’s hot mess tweets every hour on the hour.

Just when we thought things couldn’t get worse, 2020 comes and he’s responsible for mismanaging the biggest public health crisis of our lifetime. After losing family and friends due to COVID-19 while watching my city burn due to the protests over the killings of George Floyd and Breonna Taylor — this election victory feels like a reset.

No, Biden isn’t going to save the soul of America overnight, but stuff will finally calm down and get back to some sense of normalcy. For starters, I can’t wait to return back to a boring ass president who doesn’t have tabloid scandals left and right. Biden is going to be dry in the best way possible, and my mind can be at ease.

VP Kamala Harris is clearly going to be the life of the party, and finally, we’ll be able to have some real talk with her about how to address criminal justice issues impacting our communities. With control of the White House, Democrats might be able to finally toughen up and use it to their advantage to work to take back the Senate in 2022 and finally clap back at problematic Republicans who ran wild with racism during Trump’s presidency.

The next four years won’t be easy, but there is promise. We gotta get out of this pandemic alive and gear up to take on an overwhelmingly conservative Supreme Court majority. But not all hope is lost. Progress under a Biden administration is possible as long as we continue to work to flip the Senate and use this momentum to keep our local politics as robust.

If we learned anything from this historic election, it is that the Black vote is powerful nationally — and should be leveraged as much in cities and states as well. We got the power, no cap. And it’s our time to not let it slip ever again.