Clyburn, a South Carolina Democrat, is the highest-ranking African American member of Congress

In a conversation with CNN‘s Dana Bush on Saturday, Rep. Jim Clyburn revealed he privately urged President-elect Joe Biden to choose a Black woman as his running mate.

With Biden securing the win by surpassing 270 electoral votes after gaining the battleground state of Pennsylvania, Kamala Harris makes history as the first female and Black-South Asian vice president elect.

“Joe and I talked about it several times when he was trying to make his decision,” Clyburn told Bush. “He had said it would be a woman. And I don’t mind saying now, I said to him in private that I thought that a lot of the results would turn on whether that woman (would) be a Black woman.” 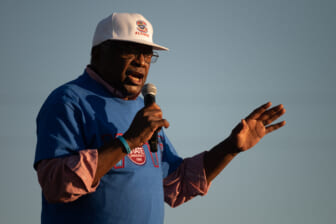 Clyburn, a South Carolina Democrat, is the highest-ranking African American member of Congress.

According to CNN exit polls, 91% of Black female voters voted in favor of Biden in comparison to 8% who voted for Trump.

Read More: Kamala Harris has a message for toddler niece who aspires to be president

Clyburn endorsed Biden in February prior to South Carolina’s Democratic primary. “My buddy Jim Clyburn, you brought me back,” Biden said of Clyburn in February.

Clyburn told Bush he was cautious to not give Biden advice publicly so as not to “diminish” him.

“I gave all my advice to him in private. But I’m very pleased that it was a Black woman selected — I think it cemented his relationship to the Black community,” Clyburn said.

In an Instagram post, journalist Ed Gordon acknowledged the pivotal role Clyburn played in the Biden-Harris campaign including rallying in South Carolina.

“Be clear, NO ONE has more to do with @joebiden winning the Presidency than @whipclyburn Biden’s candidacy was all but dead before the majority whip put his name behind the former VP,” Gordon said. “Clyburn then rallied his state of South Carolina and brought victory and momentum to Biden that ultimate lead to him becoming the Democratic nominee. A big salute to the Congressman, well done.”

In her victory speech, Harris acknowledged making history as the first female vice president-elect and encouraged young girls to follow in her footsteps.

“While I may be the first woman in this office, I will not be the last.” she said. “Because every little girl watching tonight sees that this is a country of possibilities.”